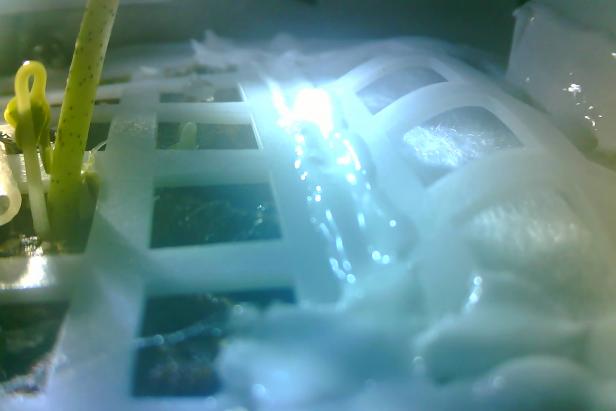 For the first time a plant sprouts on the moon!

Chinese researchers report: For the first time they have succeeded in growing a plant on the moon. A cotton seed had sprouted in a mini greenhouse on board the “Chang’e 4” lunar probe.

In the movie “The Martian”, the astronaut Mark Watney, stranded on the Red Planet, only survives because he succeeds in growing and harvesting potatoes in a mixture of Martian soil and his own excrement. Not only did this succeed dramatically, it also raises awareness of the question: How should astronauts feed themselves on long-term missions in space? Can you produce food and plant crops yourself – in a spaceship, or on a distant celestial body like Mars?

Chinese researchers are now reporting that they have succeeded in growing a plant on the moon for the first time. In a special greenhouse on board the Chinese lunar probe “Chang’e 4”, a cotton seed has sprouted, reports the official Xinhua news agency.

The experiment also included seeds from other plants, as well as fruit fly eggs and some yeast. In addition to cotton seeds, the Chinese moon lander also has potato seeds and thale cress seeds on board. The Chinese also transported a load of silk worm eggs to the moon. The images transmitted from the lunar probe to Earth showed that only cotton thrived, according to Xinhua.

“This is the first time that humans have carried out biological growth experiments on the lunar surface,” said the director of the experiment, Xie Gengxin.

The plant is not allowed to grow for a long time, however, as a very cold moonlit night lasting several days with temperatures of down to minus 170 degrees has just begun over “Chang’e 4”. The probe went into a kind of sleep mode last Sunday.

With “Chang’e 4”, China succeeded in a controlled landing on the far side of the moon for the first time in the history of space travel. Then a robot vehicle called “Jadehase 2” was also put into operation. The plant experiment was supervised by scientists from Chongqing University in southwest China.

The biological experiments on board the “Chang’e 4” are also intended to serve as preparation for manned missions. The cultivation of potatoes near the southern lunar pole could well be possible, because there is actually a supply of water there. A fundamental requirement for growing vegetables is therefore given. If this really works, it would be a wonderful opportunity to provide future residents of a lunar base with fresh food.

German scientists from the German Aerospace Research Center are also working on the goal of being able to grow vegetables in space. However, they are not yet testing their mini greenhouses in the cosmos, but only in the Antarctic for the time being.

There Neumayer Station III is grown under extreme environmental conditions, cucumbers, radishes, peppers, salads, herbs and even strawberries. The twelve square meter model greenhouse with the name “EDEN-ISS” is completely independent of weather, sunlight and time of year in order to be able to produce vegetables completely independently. Only water then has to be added to the system.

The air in the greenhouse has an increased concentration of CO2 so that the plants can grow better. Filters clean the air of spores and bacteria. UV lamps are also used for air sterilization.

The artificial sun in the Antarctic greenhouse is a combination of blue, red and white light that makes the plants shimmer purple. A day-night rhythm is also simulated: after every 16 hours of light, the plants get eight hours of rest and darkness. All of this is controlled by a computer – some parameters are individual for certain plants.