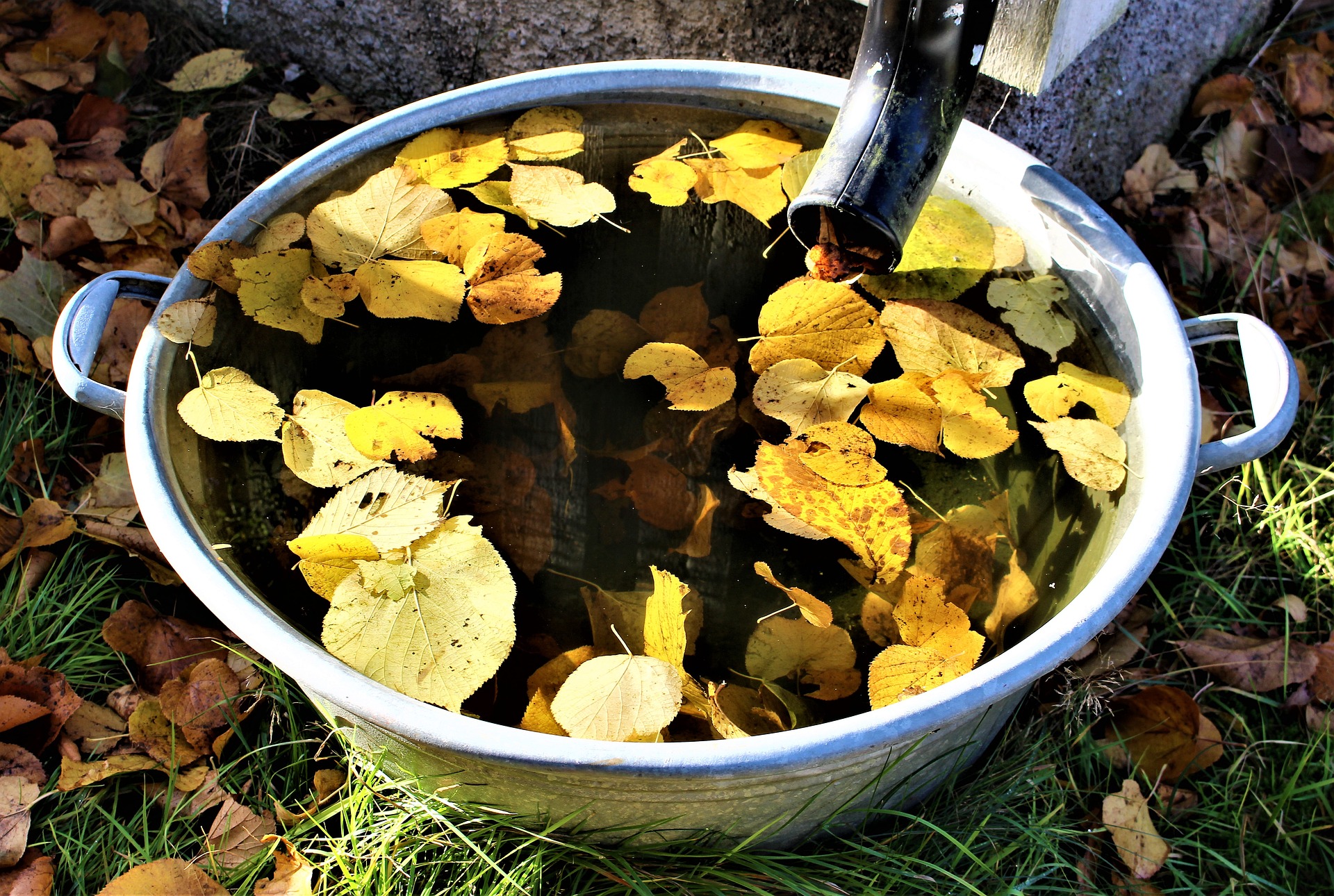 Everyone uses 128 liters of water per day (source: Statista 2019). This is water of drinking water quality, although not all of it is used for drinking. Because unlike drinking, eating, cooking and personal hygiene, water for flushing the toilet and watering the garden does not have to be of drinking water quality. Because this can only be achieved with great effort and expense. If you want to save drinking water and drinking water costs, you can collect and use rainwater instead. We’ll reveal everything you need to know in this article.

Rainwater is the precipitation that occurs when the water evaporates from seas, lakes and rivers, i.e. when it changes its physical state from liquid to gaseous. The rising water vapor cools down with increasing altitude, whereby it condenses: Small droplets of water form again, which together form a cloud. If the cloud cools down further, the small droplets become larger and larger, which at some point become so heavy that they fall out of the cloud: It is raining.

Rainwater contains different substances depending on which body of water it once evaporated from and which path it took when it climbed into the cloud and later with it. This is because various dust grains, volcanic ash, pollen, spores and microbes naturally float in the waters and in our atmosphere. In addition, there is dirt caused by humans, including fine dust from exhaust gases and tire wear from our vehicles, factories and houses, as well as pollutants that we apply in the course of cultivating arable land and forest land, for example. These dirt particles also swim in bodies of water or swirl through our air – and can be detected in the rain.

Difference between rainwater vs. Drinking water – a comparison

Rainwater is created in a natural cycle. Drinking water, on the other hand, is withdrawn from nature’s cycle and treated.

While natural rainwater is comparatively soft, the drinking water from our water pipes is rather hard. The reason for the higher water hardness of tap water are the so-called hardness builders, i.e. minerals that are in it, especially calcium and magnesium – both are essential for us humans.

3 good reasons why collecting rainwater is worth it

It was already mentioned above: Rainwater can replace a large part of the drinking water used as service water in the house and garden.

Since rainwater falls from the sky free of charge, you also save proportionately the corresponding water costs, which in turn result from the complex treatment of tap water. And you can also save on the so-called precipitation fee: This is charged for draining rainwater into the sewer (per square meter of drained area). If, on the other hand, rainwater is retained as required by law, for example evaporating on a green roof (garden shed, carport) or allowing it to seep into the garden soil (both can be achieved with controlled irrigation), you save the precipitation fee.

You should also consider the environmental costs that you collect with rainwater and save using rainwater: Drinking water is of inestimable value, it is one of the most valuable raw and valuable materials of our time. The less drinking water you waste unnecessarily on growing and caring for your ornamental and useful plants and the more rainwater you use instead, the better the ecological footprint of your own harvest.

Rainwater is the better irrigation water!

For watering plants in the house, on the balcony and in the garden, hard, i.e. very hard, tap water is rather unsuitable.

Various plants, for example rhododendrons, camellias, orchids and ferns, cannot tolerate too much lime. In addition, the additives of chlorine, fluorine and ozone, which serve as preservatives in tap water, do not get many plants.

And you should also know that: The collected and stale rainwater is usually warmer than freshly tapped irrigation water. This saves your plants a (too) cold shower.

The natural content of minerals in rainwater also has a nourishing effect on plants: it works like a mineral fertilizer.

How can you collect rainwater?

If you want to collect and use rainwater in the future, you need the necessary equipment. Which it is depends on whether you are collecting rainwater from a roof or without a roof.

Collect rainwater – that’s how it works with a roof!

The rainwater quality is best as long as the rainwater has not yet touched the ground. It is therefore best to collect rainwater fresh from roofs, for example roofs of houses, garden sheds and greenhouses, pavilions, garages, carports, patio covers or sheds. In any case, the buildings need a gutter to protect the fabric of the building to catch the rainwater and a downpipe to drain it away in a targeted manner – into the ground, an existing drainage system or in a collecting container: If the rainwater ends up in one of these, you can collect it continuously and later use as needed.

The classic is the rain barrel, which is already available in a luxurious version with a cover and tap as well as a sieve / filter.

Our tip: Smaller rain barrels are also suitable for collecting rainwater on the balcony and terrace, while larger alternatives are rain tanks and rain barrels. You can read more about choosing the right container for your rainwater collection project in our article “The rain barrel at the garden house: better irrigation water for free”.

3 ways to collect rainwater – this is how it works without a roof!

You don’t have a roof to collect rainwater? Then let us show you three alternatives:

Our tip: Are you missing trees or posts to attach the tarpaulin? No problem! Install a rotary clothes dryer in the garden! In sunny weather you can dry your laundry on it and in rainy weather you can put a tarpaulin and collect the rainwater.