Many hobby gardeners enjoy colorful butterflies and moths that can be observed in the garden on flowers and plants. But many butterflies put their caterpillars in the garden and thus cause crop failures or destroyed flower beds.

The caterpillars are among the unpleasant pests in the garden and ornamental garden. Depending on the type of caterpillar, leaves and parts of plants are eaten, and even the beloved cabbage vegetables do not stop at the voracious animals in summer, as the picture opposite shows.

In the following article you will find useful information about individual caterpillars and their damage, as well as efficient tips for environmentally friendly caterpillar control in the garden.

Caterpillars occur once in every garden. The larvae of butterflies and other insects that feed on parts of plants are to blame. The animals quickly spread throughout the garden and damage the useful and ornamental plants.

If a caterpillar infestation is found, it is important to act quickly before the stock becomes too large. If the plant pests occur only sporadically, they can be easily collected and transferred, for example to a nearby section of forest or an uninhabited green area.

Alternatively, collected caterpillars can be offered to the wild birds as fresh feed.

As a preventive measure, the risk of infestation by the pests can be reduced if the cabbage plants are covered with a crop protection network immediately after sowing or planting.

Culture protection nets should remain on the crops for the entire period of growth if possible. In addition, the nets also protect against other pests such as the cabbage fly and mealy cabbage aphid and bird feed. 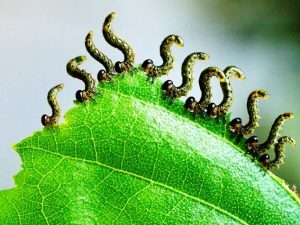 For home remedies, the motto is “trial and effect”, since not all caterpillar types respond to the same spilling agents.

If the use of the home remedy has no effect, switch to another remedy before reaching for the chemical club and putting unnecessary strain on your kitchen garden.

Collecting is definitely one of the most environmentally friendly measures.

Warning: Always be careful when using oil-containing preparations, they often harm the plant more than that they eliminate the pests because they close the sensitive plant pores.

The following home remedies have proven effective in fighting caterpillars:

1. Some types of caterpillars are sensitive to the smell of tobacco. Spread tobacco ash on moistened parts of the plant for a gentle caterpillar crawl.

2. Garlic or algae lime are recommended as preventive measures. Plant fresh garlic between infested plants or sprinkle parts of the plant with garlic powder and seaweed lime.

4. In well-stocked nurseries, you can borrow a special vacuum that can be used in the event of heavy caterpillar infestation. 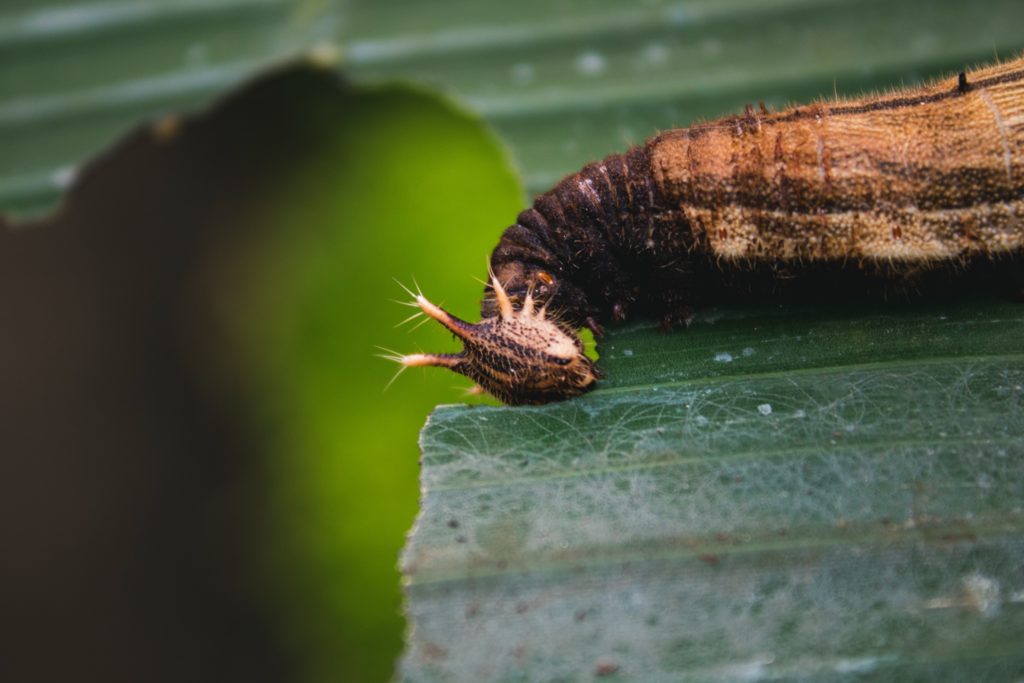 If all gentle measures lead to no result and the plant life in the garden is still threatened by caterpillars, chemical pesticides can be used.

When it comes to pest control, it is generally important to know which garden enemy you are trying to sell: if you are unsure, collect a few copies and show them to an expert in the garden center to choose an insecticide with the right ingredients.

It is also important to choose a plant protection product with an approval for the type of cabbage affected.

For a first overview you will find a picture gallery below with important information on typical caterpillar types in the hobby garden. 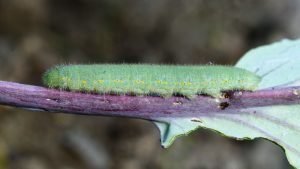 The small cabbage white butterfly is a butterfly with white-yellowish wings and is one of the most common butterflies in Central Europe. The caterpillars are colored green, have yellowish stripes and are up to 25 millimeters long.

Cabbage whitelings produce up to four generations from March to November. Wintering takes place in the pupa stage above the earth.

As a pest, the white like to infest crops such as capers, nasturtiums and all types of cabbage.

Typical infestation marks can be found in June. Fight the caterpillars before they have eaten in the cabbages or inside the crops.

If you stretch nets over the cabbages between April and September, the butterfly cannot lay its eggs on the leaves.

Tip: Also check the undersides of the leaves regularly as soon as you have spotted a butterfly in the garden: eggs and the first caterpillars are removed and moved or destroyed as soon as possible. 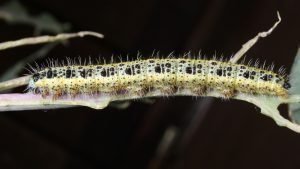 The large cabbage white butterfly produces up to three generations between March and October. 10-20 eggs are laid in the clutch, usually between July and August.

The hatched caterpillars are colored green and show distinctive dark spots. Adult specimens grow up to 40 millimeters in size and cause considerable damage to cruciferous plants and in cabbage cultivation (especially from July to September).

The cabbage white parasitic wasps are used as an important parasitoid in agricultural operations for biological control.

Tip: Culture nets are pre-tensioned in the house garden and the undersides of the leaves are regularly checked for infestation, eggs and caterpillars are removed if necessary. Mugwort and anise serve as natural insect repellants. 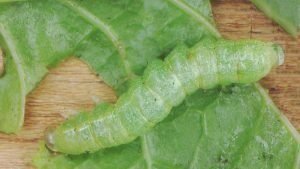 The cabbage cockroach is a butterfly from the half-moth family. Caterpillars grow up to 9 millimeters long and are colored green. When touched, the inconspicuous larva writhes, which forms a brown capsule in the final stage of growth.

The caterpillars are particularly common in Central Europe between July and September, and the herbivores feed on leaves of different cruciferous plants, often resulting in complete skeletal feeding. When growing cabbage, the flower is often eaten.

However, controlling cabbage moths is often complicated because many cabbage moths have developed resistance to insecticides. A regular change of active ingredient is therefore recommended by experts.

The charcoal owl belongs to the owl family and develops a wingspan of up to 44 millimeters.

The moths are usually gray-brown to black in color. The colors and drawings of the caterpillars vary from green to brown with light to yellowish side stripes.

The caterpillars can be found between June and October. Now they feed on herbaceous plants, tomatoes, cabbage, garden salad and many other useful and ornamental plants.

Insecticides are used to control pests in cabbage cultivation. Preventive protective nets that are stretched over the plant stocks and even prevent further generation of larvae in the event of pre-infestation are more environmentally friendly, since no wedding flight can take place under the net.

Exposing parasitic wasps as a natural predator of the cabbage moth can also lead to success. Collect the small caterpillars from the plants at night.

The small frost tensioner belongs to the forest pests and is nocturnal. The female and male animals can be easily distinguished from each other optically: with up to 25 millimeters wingspan, the brown males are larger than the flightless females, which move crawling.

In autumn the moths hatch and mate on host trees, on which eggs are finally laid in bark cracks.

In early spring, the larvae hatch and feed on the leaves and buds of the trees until June and live in fine webs between the branches until they are fully grown.

Now they slide onto the floor on a spider thread and pupate in the floor.

Deciduous and fruit trees are particularly often attacked by the larvae. This can lead to balding on the entire tree. To protect your tree population, you can attach glue rings around the tree before the onset of autumn, on which the climbing females get caught and die.

Warning: young caterpillars can be spread by the wind. Trees that have already been infected must be treated with beneficial insecticides to prevent the pests from spreading. 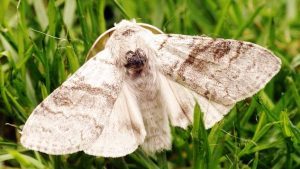 The Kohlzünsler belongs to the Crambidae family and develops a wingspan of up to 33 millimeters. Its wings are colored light brown and have discal spots.

The green caterpillars feed on leaves of various cruciferous plants, arugula and cabbages. Second generation larvae hibernate until next spring and pupate only on warm days.

Cabbage caterpillars rarely appear in domestic gardens. However, cultural protection networks help prevent caterpillars. Alternatively, you can use pesticides that have an approval for the type of cabbage affected.