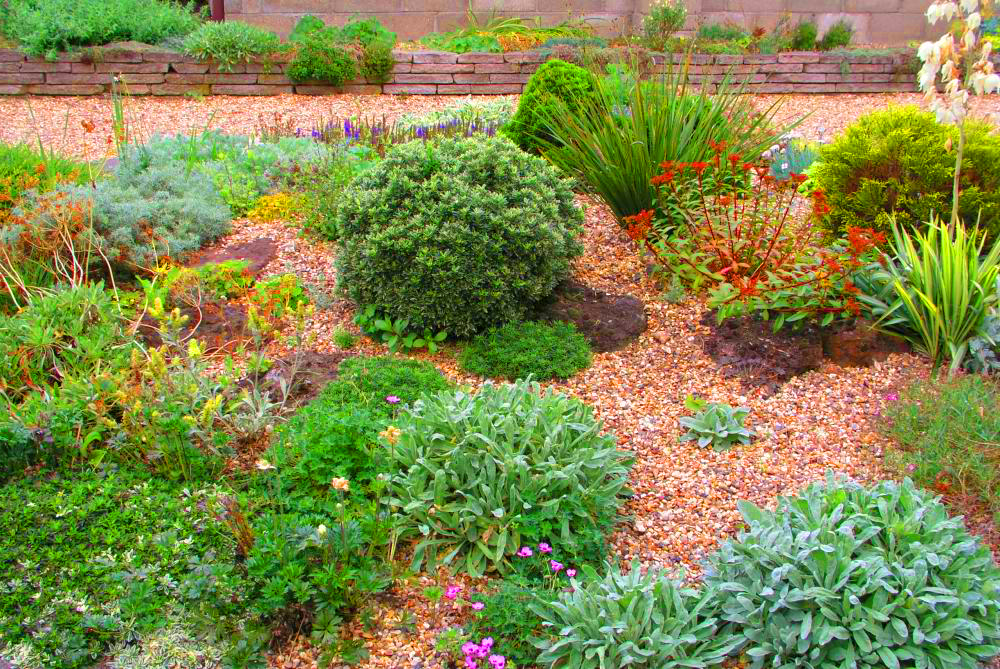 A gravel garden with its grasses and flowering perennials is particularly attractive in late summer. This is how you transform your property into a colorful sea of ​​flowers.

The classic gravel garden, not to be confused with a lifeless gravel garden, is exposed to direct sun and consists of a permeable soil interspersed with rubble. The loose, warm, water-permeable subsoil is the best friend of prairie perennials, but many rock garden perennials, grasses and flowering perennials also like to grow in the gravel.

There are a few things to consider for a characteristic planting of the gravel garden. A classic steppe landscape is characterized by loose, seemingly random planting. Gaps are allowed and loosen up the plant image. Play with different heights and structures – anything is allowed, as long as it looks natural.

Varied beds with prairie shrubs and grasses look particularly harmonious. Combinations of gold spurge (Euphorbia polychroma), yarrow (Achillea millefoloium ‘Salmon Beauty’), torch lilies (Kniphofia x praecox) and tufted grass (Stipa tenuissima) make the gravel garden bloom even on hot summer days and bathe it in a warm light in autumn. Onion plants such as imperial crown (Fritillaria imperialis), ornamental leeks (Allium) and tulips provide colorful accents in spring. If you arrange the drought-resistant, sun-loving flowering perennials and ornamental grasses in small groups, so-called tuffs, they give the bed its very own charm. A meadow-like plantation creates a natural, harmonious atmosphere. The new place in the garden is now crying out for a bench on which you can enjoy your blossom oasis in peace in the evening.

The right substrate for the gravel garden

You can either turn your entire property or just part of it into a gravel garden. On the area provided for this, remove the topsoil to a depth of 25 to 30 centimeters and mix it in roughly equal parts with coarse gravel with a grain size of 16/32 (small stones 16 to 32 millimeters in diameter). Fill in this mixture again 20 to 25 centimeters high and then lay a plastic fleece (geo fleece) on the surface. Spread the plants over the area and cut the fleece in a cross shape at the points where the plants are to be used. After planting, a five centimeter thick layer of gravel or chippings is placed on the fleece as a cover. The fleece fulfills several functions: on the one hand, it prevents the gravel or chippings from sinking into the ground, and on the other hand, it inhibits weed growth. If possible, do not use white gravel as a cover, because it reflects the sunlight very strongly in summer. A dark surface heats up faster in spring and thus promotes plant growth.

Paths in the gravel garden

There are no specially laid out paths in a classically designed gravel garden. Path areas are easily recognized by the fact that there are no plants growing there, but they are otherwise built up exactly like the bed areas and are also underlaid with a fleece so that the surface does not sink into the ground. A substructure made of gravel is not absolutely necessary for path surfaces – it is usually sufficient if you remove a little topsoil, compact the subsoil a little and lay the fleece on top. If possible, do not choose gravel as the road surface, but rather gravel or chippings, the broken stones tilt together and do not give as much under the soles of the shoes as round pebbles.

Water the beds in the gravel garden regularly in the first year so that the plants can gain a foothold. After that, little or no casting effort is necessary. The maintenance effort of a gravel bed is much lower than that of a conventional splendid perennial bed. If unwanted wild herbs should spread, weeding in the gravel bed is much easier because the roots of the weeds cannot anchor themselves as firmly in the gravel as in normal garden soil.

Most plants get by without additional fertilization. In the event of sudden heat waves without sufficient moisture, fertilizer can even cause the plant to die. It should not be forgotten that prairie perennials are true survivors by nature and have adapted to the low water and nutrient supply of their natural locations.

In addition to the real gravel garden with coarse-grained subsoil, there is also the so-called sham gravel garden with perennials and grasses that feel comfortable in the normal garden soil. You do not need a permeable gravel substrate for this gravel garden variant: Simply lay out the fleece on the unplanted soil and cut it in the places where the plants are to be planted. In this case, the gravel or crushed stone is only used to hide the fleece cover and does not come into contact with the plant roots. Therefore, it only has a minor influence on plant growth and soil conditions.

There is no lawn in this 100 square meter garden. Instead, a stream meanders through a varied plantation of perennials, grasses and small shrubs. The seat was designed as a wooden terrace, over which a sun sail is stretched. A red concrete wall provides privacy. On the other hand, an evergreen bamboo hedge keeps the eyes away. From the terrace there is a path through the garden. It crosses the stream and leads past a group of plants made up of red bladder sparrow (Physocarpus opulifolius ‘Diabolo’), dark red yarrow (Achillea millefolium ‘Petra’) and yellow-red torch lily (Kniphofia). The water basin with its red concrete surround sets a special accent. Water bubbles out of the three natural stone steles. White buddleia (Buddleija davidii) and yellow hot herb (Phlomis russeliana) bloom next to the small red seating area.