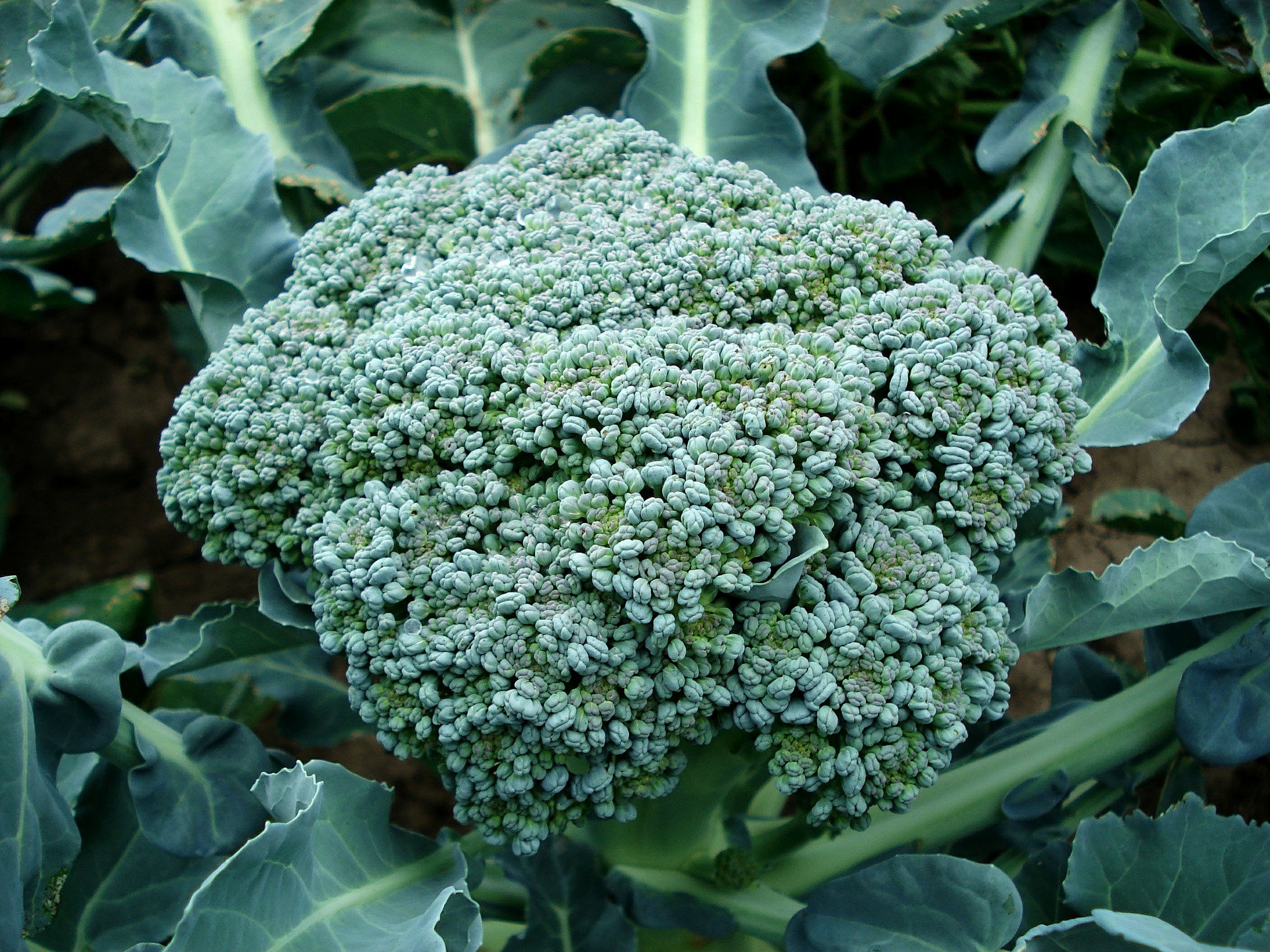 Broccoli is a delicate, easy-care cabbage vegetable with fine flower buds. Broccoli is rich in minerals and vitamins. It tastes cooked or steamed as a vegetable side dish, in casseroles or straight. How to properly plant, care for and harvest the relative of the cauliflower.

Like cauliflower, broccoli (Brassica oleracea var. Italica) belongs to the cruciferous family (Cruciferae). It originally comes from Asia Minor and has been grown in Europe, especially in Italy and France, since the 16th century. It is believed that both broccoli and cauliflower are derived from the Brassica cretica plant, which grows wild in southern Greece. You can buy broccoli all year round, but growing it yourself is worthwhile because, unlike its close relative – cauliflower – the buds harvested shortly before flowering cannot be stored for long. The florets soften quickly and lose a large part of the vitamins they contain and their firm bite. Another reason for growing it in your own garden: Broccoli grows much faster and is less demanding than cauliflower.

Unlike cauliflower, broccoli does not develop a closed inflorescence, but rather large leaves that sit on long, fleshy stems and green or purple flower buds in loose heads. Broccoli is a relatively straightforward cabbage vegetable that can be harvested almost all year round. This is because its stem axis reproduces new side shoots with flower buds after cutting.

Two types are of particular interest to amateur gardeners: the summer and autumn broccoli from Italy and the particularly cold-resistant varieties grown in England, which are known as winter broccoli. With a clever choice of varieties, you can harvest all year round in your own garden. The latter is only hardy with us in mild winters.

The heavy hog broccoli thrives best on deep, nutrient-rich soils with good water storage capacity in a sunny spot in the vegetable patch. Since broccoli, like cauliflower, prefers a higher lime content, the soil should be supplied with algae lime in autumn.

Like all types of cabbage, broccoli thrives in a versatile mixed culture. Beans, dill, beetroot and endive salad, but also Swiss chard, leek, celery, radishes or radishes are suitable as bedding partners.

If you want to give preference to broccoli from seeds, you need a little patience, because it takes at least 30 days from sowing to planting seedlings. Early varieties can be grown in seed boxes with humus-rich seed compost from January to March. The ideal germination temperature is 15 to 20 degrees Celsius. Tip: If you want to grow a lot of cabbage plants, use space-saving multi-pot plates. After germination, the seedlings should be pricked out into five-centimeter single pots. From mid / end of May you can also sow directly into the bed. You use three grains per planting hole. After germination, only the strongest seedling is left to stand. The planting date for winter broccoli is in August and September. It is then ready for harvest in April to May.

As soon as the young plants have deeply rooted the ball of the earth and formed three to five leaves, they can move under fleece into the field from April. Plant them deep enough so that the roots are covered with soil about an inch. The planting distance is 40 to 50 centimeters. A generous amount of compost (three to five liters per square meter) when preparing the bed ensures a good start. Algae lime (approx. 30 grams per square meter) covers the high demand for calcium and provides important trace elements such as magnesium.

Broccoli requires regular intake of water and nutrients. After planting, it is important to water the cabbage vegetables well. In the following two to three weeks you should only water sparingly, then again more generously. You should also hoe frequently and paddle the plants regularly. In order for the nutrient-hungry cabbage to develop well and to form many side shoots, a liquid vegetable fertilizer or nettle manure is given about six weeks after planting or before bud formation begins. This prevents stagnation in growth.

Winter broccoli is an exception. Since it is supposed to grow slowly, you should feed it sparingly with horn shavings or organic vegetable fertilizer. A second fertilization should be postponed to spring, because nutrients administered in autumn affect the frost resistance. With winter broccoli in particular, it is important that the plants grow slowly and form firm leaves, because only then will they survive a few freezing temperatures without damage.

Broccoli is ready to harvest in around seven weeks, but varieties planted in autumn need at least ten weeks. With winter broccoli it takes almost six months to harvest, but you can cut sprouts continuously from March to May. You can tell the right time to harvest from the fact that the individual flower buds are clearly pronounced and swollen, but still firmly closed. If the flower is already loose and has a yellow sheen, the buds taste unpleasantly carbonaceous. Cut off the inflorescences that are still closed with a sharp knife. The thinner side shoots can also be used. After cutting the central button, thinner side shoots, so-called “side roses”, grow back again.

In addition to the florets, the stems can also be cooked. The stalk can be peeled with a potato peeler and consumed as well. After harvesting, you should use broccoli as quickly as possible or store it in the refrigerator for a maximum of two to three days. You can also freeze your broccoli. Then you should blanch it beforehand. Broccoli seedlings can be used as microgreens in the kitchen.

Traditional varieties form new side shoots three to four weeks after harvesting the central bud. These include ‘Calabrese’, Penta ’and Summer Purple’. Professional varieties are only suitable for a one-off cut and hardly develop any side shoots such as ‘Parthenon’. ‘Santee’ and ‘Rosalind’ have a beautiful, red-violet flower. The robust organic variety ‘Coastal’ is suitable for growing in early spring as well as for autumn cultivation. The winter broccoli variety ‘White Sprouting’ can be sown until the beginning of September and winters on the bed under a protective fleece at temperatures down to minus 8 degrees Celsius.

The larvae of the cabbage-heart mosquito destroy the central button and cause stunted growth because their saliva contains substances that inhibit growth. A close-meshed vegetable net or fleece as well as cultivation in wind-open locations can help. The vegetable net also prevents damage from aphids and cabbage flies. A mixed culture with nasturtiums (non-climbing varieties!) Can prevent an infestation with the caterpillars of the cabbage white butterfly. A break in cultivation in the same bed of at least four years with all types of cabbage can prevent root diseases such as cabbage hernia. Tip: Put a portion of algae lime directly into the planting hole when planting, this also serves as a preventive measure.

Where does broccoli come from?
Broccoli actually comes from Asia Minor, but has been grown in Europe since the 16th century. It is believed that both broccoli and cauliflower come from the southern Greek plant Brassica cretica.

When can you plant broccoli?
Broccoli is best planted outdoors from April. A fleece protects the still young plants from possible frosts.

When can you harvest broccoli?
Broccoli planted in the spring is ready to harvest around seven weeks after planting. If broccoli is planted in autumn, you have to be patient for almost ten weeks before harvest. If you plant broccoli in winter, it even takes half a year before you can harvest the first flower buds.

What is the best way to store broccoli?
Broccoli does not have a long shelf life. It keeps in the refrigerator for about two to three days. It is better to blanch and freeze it.