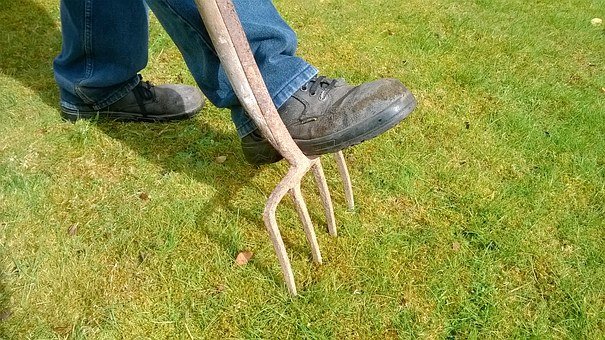 In order for a lawn to grow nice and dense and lush green, it has to be ventilated and ventilated occasionally. We recommend airing the lawn once a year. By so-called aeration, the soil becomes looser, more oxygen reaches the roots and the lawn grasses thrive better. Here’s how to do it correctly.

Lush green and dense: who doesn’t dream of a lawn like this? In order for this dream to come true, lawn grasses need a lot of air in addition to regular maintenance (mowing the lawn, fertilizing). In doing so, you often have to support the lawn a little by ventilating or ventilating it – or as the expert says: aerating it. Different procedures are possible for this. Small areas can be ventilated with simple means; there are special devices for larger lawns.

Fresh air for the grass roots

You know it from yourself: In stuffy air you feel uncomfortable, get lazy and sluggish. It is the same with lawn grasses: if their roots can hardly breathe under a matted sward, the lawn grows visibly worse and becomes susceptible to weeds and moss.

The fault is caused by microorganisms that either only work grumpily or are not even there. Because in the soil, the tiny helpers actually ensure a continuous breakdown and conversion of organic matter, which otherwise collects as felt between the stalks on lawns. Dense thatch often forms on poorly cared for lawns that suffer from a lack of nutrients and often have to grow on compacted and acidic soil. In such soils, the soil organisms no longer want to work, dead plant remains and, above all, clippings from mulching remain, moss migrates and a spongy mass forms between the stalks. These are pressed together by frequent stepping on and the beautiful green is done.

When airing the lawn, the felt from dead stalks and mosses is combed out of the turf, which allows the roots to breathe again and to get enough water and nutrients from the seepage water. This has the same effect on the lawn as ventilating an apartment – only with a long-term effect.

The best time to ventilate is between April and September. You should ventilate your lawn annually, but at the same time promote the soil life continuously so that dense matting does not arise in the first place. To do this, spread a soil activator or a thin layer of compost on the lawn and ideally fertilize with organic lawn fertilizer.

This is how you ventilate and aerate your lawn

Lack of oxygen and soil compaction can hit any soil, but loamy soil is most common. The reason for this lies in the particularly fine-grain structure of the soil particles, which under load leads to an enormous density of the soil, since coarse and medium pores collapse. Here, too, ventilation is always only first aid, but very effective. In combination with other treatments such as sanding and continuous soil improvement through organic matter, the lawn will feel more and more comfortable, as the soil structure becomes looser and, above all, more stable.

When aerating, you go deep and loosen the soil under the lawn. This supplies it with oxygen, allows water to seep away better and breaks up superficial condensation that can be seen in wet areas or even stagnant water. Often plantain (Plantago major) also spreads – a pointer plant for compacted soils. For heavily used lawns and loamy soil, aerating should be part of regular lawn care – ideally every one to two months. If the lawn is rarely used, once a year is enough. Aerate from the end of March to the beginning of October if the weather is suitable. The soil should be earth-moist, i.e. neither bone dry nor cardboard-wet.

How is the lawn aerated?

Digging forks and construction sand help against punctual soil compaction: Pierce the tines as completely as possible into the soil in the affected areas and shake the holes wider. This creates channels that divert the water into the deeper soil layers. So that the channels are permanently preserved, they are filled with fine-grained sand during the subsequent sanding process.

It’s even easier with so-called aeration forks, which not only punch holes in the ground and displace the earth, but also punch out thin, cylindrical “sausages” with their hollow prongs. You work backwards away from the holes so as not to re-enter the soil ejection.

If you like it convenient, you can borrow a motorized aerator from a hardware store: It works on the same principle as aeration forks, but the hollow spikes are on a rotating roller.

Sanding the lawn: this is how it’s done

Sands in spring make the soil more permeable, as the rain gradually flushes the sand into the ground

As a permanent soil loosening supplement to ventilation and aeration, you can sand heavy soils in spring: Spread a good five liters of play sand or construction sand per square meter and level the sand with a street broom, a lawn squeegee or the back of a rake so that the sand goes with the rainwater is gradually flushed into the ventilation holes. By the way: sanding the lawn is also very effective after scarifying.