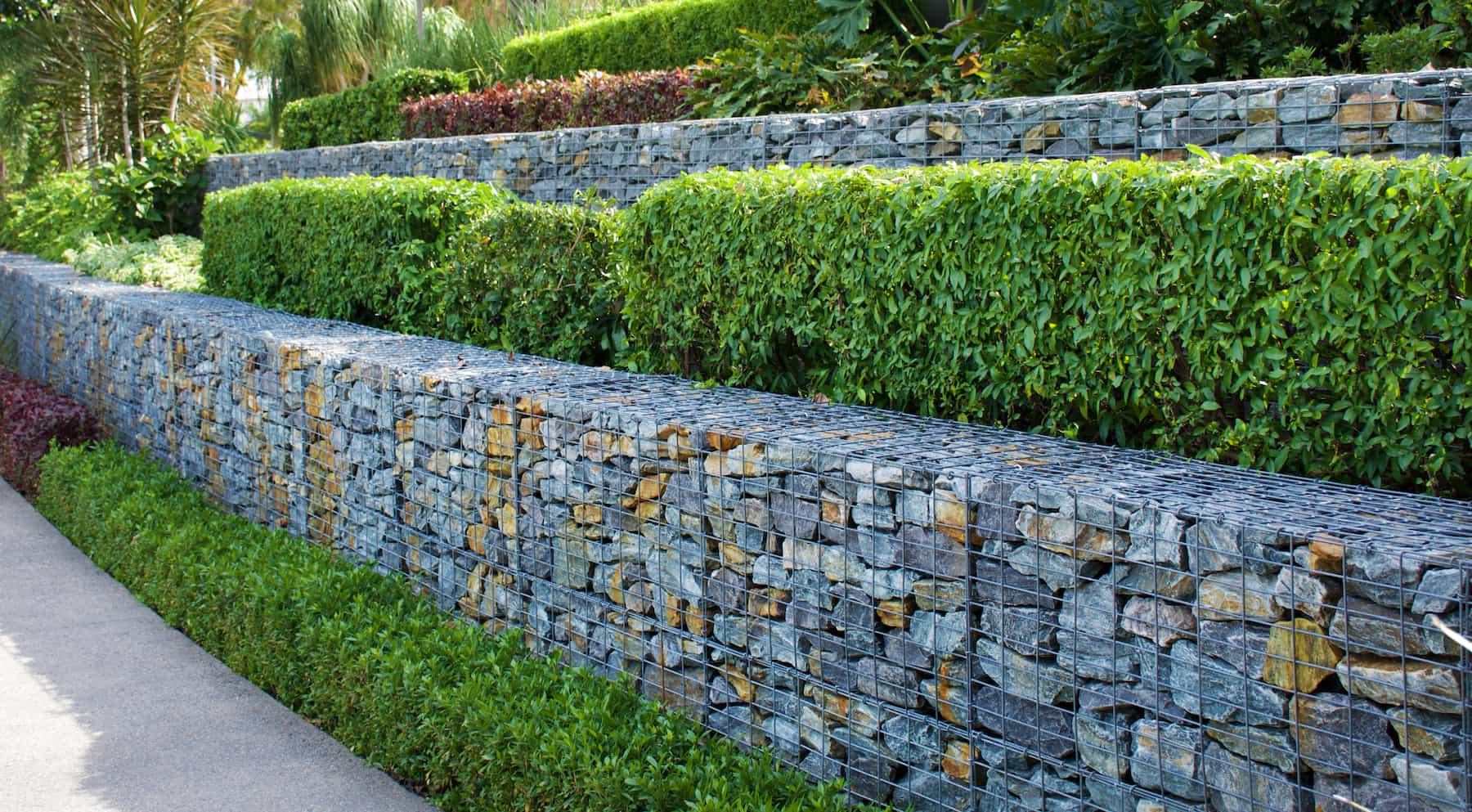 Wire baskets filled with stones of all kinds, so-called gabions, have been enjoying increasing popularity for garden boundary and garden design for years. If you find the heavy wicker walls in their stone gray in gray too monotonous, you can green your gabions. We explain here how this works, which plants are particularly suitable for it and what you should consider when planting gabions.

Wire baskets filled with coarse gravel could only be seen at the turn of the millennium if you were driving on the highway. On the right and left, they were piled high as soundproof walls on the edge of the road. Gabions were also used early on to secure slopes, for example on vineyard slopes.

Today there are gabions in the home gardens: as a fence (garden fence), as a privacy screen or as a decorative piece of garden furniture to sit on or on, for barbecuing or for planting. The wire mesh baskets are no longer just cubic or cuboid. They are now also available, for example, in the form of columns or snails. 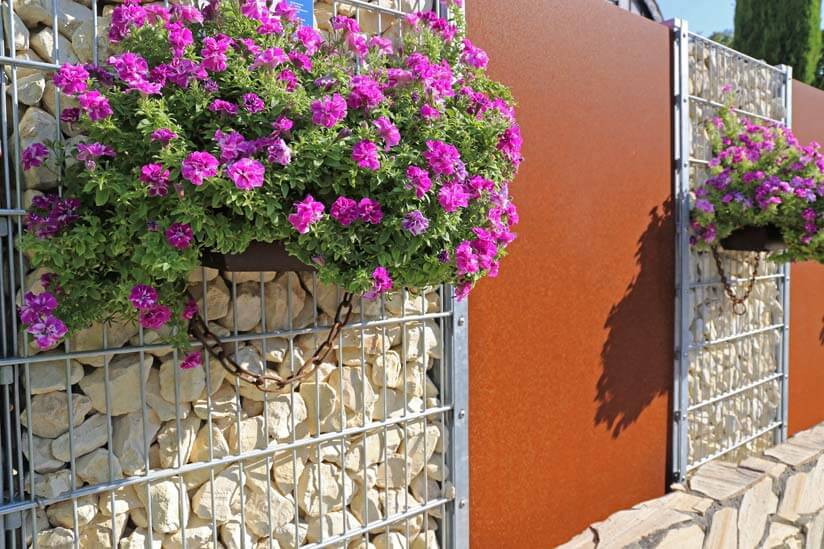 There are several reasons for the growth of gabions in gardens and front gardens: The unfilled wire baskets can be set up easily and without heavy equipment, because they don’t weigh much when empty. It is also easy to connect the individual gabion baskets to one another:

-Depending on the design, they can be attached to one another, for example, by means of a spiral which is pulled through the mesh.

-Other gabions have round eyelets on the side, through which you push a straight rod.

-Or the baskets are clamped together with so-called C-rings.

You can transport and fill the ballast filling in smaller portions.

Our tip: Even if the gabions themselves are easy to set up, you should not neglect the statics of the construction. If in doubt, the advice of a structural engineer should be consulted, because an incorrectly constructed gabion wall can sometimes tip over. 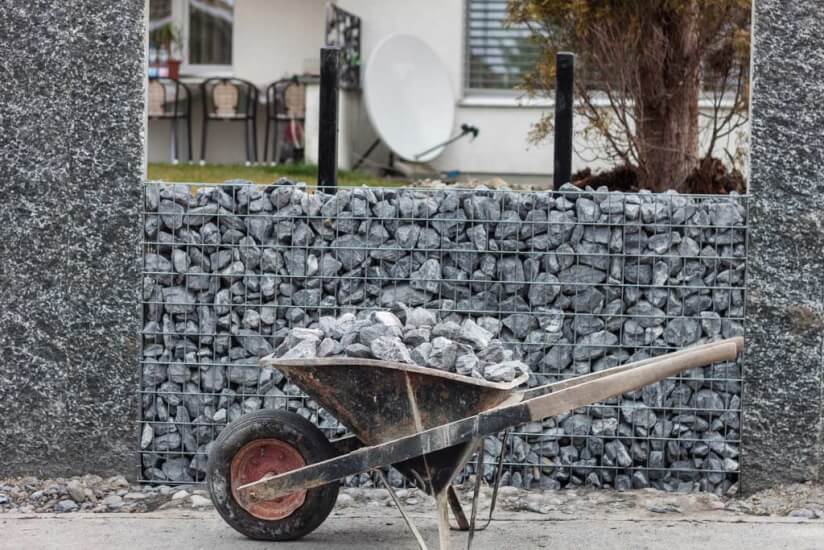 1.Gabions look very modern with their straight lines. They stand in strong visual contrast to everything that nature produces in the garden. If this contrast is too great for you, you can plant your gabions to weaken their straightness.

2. There are different ways to fill the gabions. The color of the stone basket wall varies depending on the type of stone you put in the wire baskets – all possible stone colors from white to gray, red and brown to black are conceivable. If this seems to stone, you can counteract with a gabion planting. Whether green plants or colorful flowers, the choice is yours!

Our tip: If dense gabions are to be planted, you can save a lot of money when filling the wire baskets, because then a comparatively inexpensive stone filling is sufficient – nobody will see them later!

3.By planting your gabions, increase the stability of the stone basket construction. Because the roots of the gabion greenery spread through the grids and grow together. The root network stabilizes the gabions.

Only the waterlogging speaks against the gabion planting, which can accumulate more in the construction. In the worst case, it leads to faster corrosion (rust attack) of the wire baskets. Allow about ten years for the corrosion to set in – that’s about three times as fast as without gabion planting. To counteract this, you should therefore rely on gabion baskets made of stainless steel, which come with the highest material-specific corrosion protection. 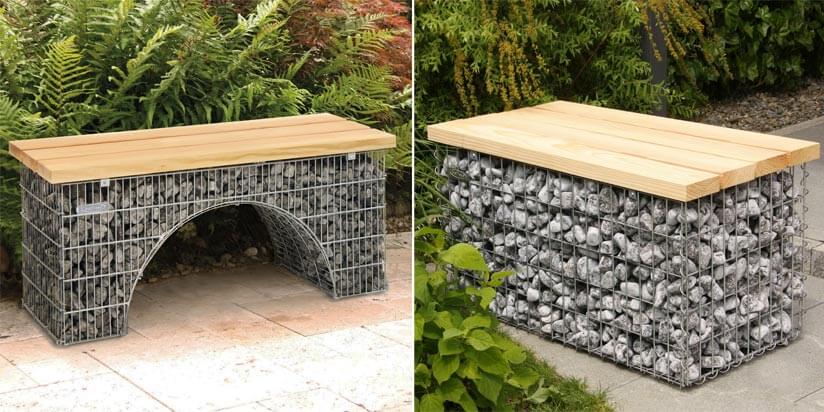 You have several options for planting gabions, which we will introduce to you in the following. Let’s start with the filling!

Plant the fronts (front and back) of the gabions: with tendrils and climbing plants
Vines that you plant directly in front of the gabions climb up on the wire grids of the stone baskets and form a green curtain, behind which the stone baskets gradually disappear. Since the baskets have both longitudinal and transverse struts as a climbing aid, a wide variety of climbing plants are suitable as gabion plantings. Rankers as well as self-climbers, twists and winders grow up on the gabions. Therefore climbing plants such as the classic ivy, clematis, wild wine, roses and climbing hydrangeas are recommended.

Our tip: You can create additional climbing aids by tensioning ropes of the wires in front of the wire baskets. Or anchor it with a suitable mortar between the stones.

Alternatively, you can line the wire mesh baskets with fleece mats or coconut mats. Then fill in earth instead of stones. Where the gabions are to be planted, cut a hole in the fleece or mat and place the plant in there from the outside.

Our tip: This mat-wise procedure for planting gabions is also very suitable for tall gabion columns.

Plant the gabion crown: with flowers, herbs, fruits and vegetables

The top of gabions can also be planted with a little effort: the so-called crown. To do this, either fill up only two thirds of the wire baskets with stones and the rest with earth. There you can even plant a kind of hedge made of hardy perennials (for example so-called upholstery perennials like the blue pillow), for example to achieve even better privacy. Grasses or rock garden plants also do very well there.

Our tip: It is important that the earth does not sag down or wash away when it rains.

Or they use double-walled gabions, which already have cutouts for the earth that can be lined with textile mats (fleece). So the “flower box” is practically built in.
Basically, heat-loving, frugal plants get well if you plant them on the gabion crown.

Our tip: A single such double-walled gabion can also serve as a back-friendly raised bed, which you can plant with herbs, vegetables or fruit as you wish. For example, hanging strawberries thrive very well on it.

You should know that the soil on the gabion loses nutrients over time. It is therefore advisable to first plant so-called heavy feeders (e.g. aster, lamp cleaner grass), which will then be replaced by middle feeders (e.g. lavender, ribbon flower) and weak feeders (e.g. primroses, azaleas) from the third year of the gabion. 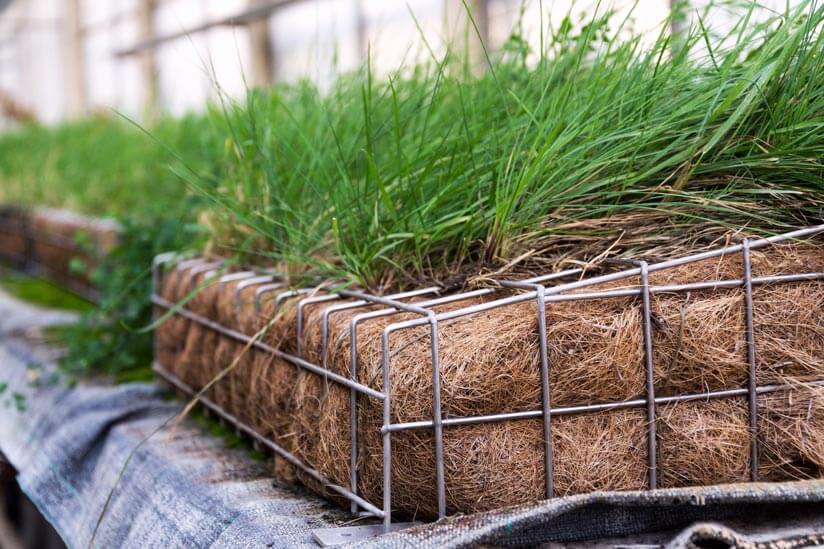 Plant the crown and sides of gabions: with a lawn rug

You can also combine the gabion planting on the top with that on the sides. In this way, climbing and climbing plants can also be “pulled” over the crown. Or you can line the mesh baskets with grass turf from the inside and fill the remaining cavity with earth. The turf can be placed on the crown from the outside. The result is simple green walls or cubes that blend seamlessly into the garden landscape and are particularly easy to care for.