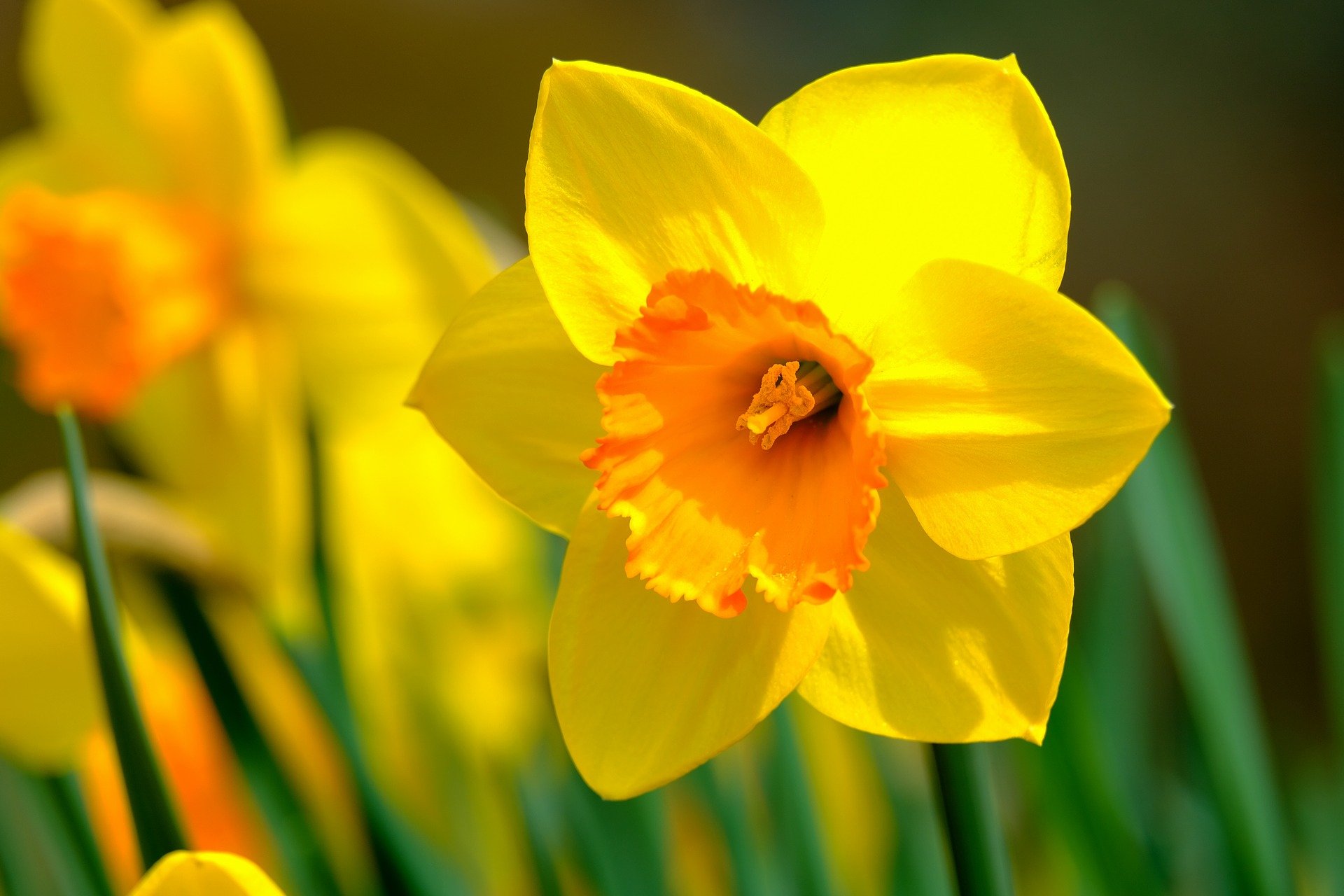 When spring begins and Easter is just around the corner, the daffodils ring everywhere. They are nothing more than one of many names for daffodils or especially the wild daffodil (Narcissus pseudonarcissus). Already in the time of the Greeks the prized plants were called “narkissos”. The well-known and popular onion plants can be found in most gardens. Their horticultural value is comparable to that of the tulips. Since plant breeding began to adopt daffodils in the 18th century, more than 20,000 cultivars have emerged from the 70 known species.

Daffodils, botanically Narcissus, have their main distribution area around the Mediterranean Sea, further to the Middle East and Central Europe. We know the popular daffodil (Narcissus pseudonarcissus) from numerous natural locations. It is widespread in light forests and meadows across Europe. Numerous natural species are often known to lovers and sought after. Narcissus cultivars are more popular and, due to their diversity, are divided into 12 classes according to their species origin. These include Trumpet Narcissus, Triandrus Narcissus, Jonquilla Narcissus or Poeticus Narcissus.

What they all have in common is that their sprout arises from an onion. It is rounded, tapering at the tip and surrounded by a thin onion skin. During the growth period, roots up to 40 cm long develop from the onion soil, which are shed and broken down during the rest period. The foliage is linear to belt-shaped. It appears with the flower shaft basal from the root organ. The leaves outlast the flowering for a few weeks until they brown and the plant changes to the dormant phase. Depending on the species and origin, the stature varies from 5 to 60 cm. It is undisputed that the flowers make the ornamental value. The pile is very different depending on parentage and class. In terms of color, they vary from white to typical yellow to orange. All daffodils form a radially symmetrical wreath of petals. This is called the main crown and is plate-shaped. The secondary crown is a kind of tube that appears trumpet-shaped, bowl-shaped, cup-shaped or bowl-shaped. In some breeds, the side crown looks almost stunted. Another distinguishing feature of the individual classes can be the number of flowers per stem. Many daffodils have individual flowers on the stem, while Triandrus, Jonquillen or Tazette daffodils have several flowers on a stem. The common garden daffodils have their flowering period from March to May. Only botanical daffodils, which are wild species, sometimes have flowering times in late autumn or winter.

Daffodils, like primroses, pansies, tulips and grape hyacinths, are classics of spring bloomers. As potted plants, they often decorate spring arrangements on balconies and patios. Later they can be planted in the bed. Most hybrids are suitable for being released under trees or bushes, as well as in hedges or in flowerbeds. Daffodils also grow wild in natural meadows. Small shapes effectively enrich rock gardens or trough plantings.

How are daffodils properly planted?

Daffodils are planted in autumn until frost, preferably in September. Early setting has the advantage that the plants can take root and withstand winter and severe frosts better. A sunny or partially shaded place is possible. It is planted in a water-permeable and moderately fertile soil. As a planting depth, it is advisable to plant the onions one and a half times as deep as the onion is high. A depth of about 10 to 15 cm is assumed. Smaller onions, for example from botanical species, are planted less deeply. When planting several bulbs, a distance of 12-15 cm is taken into account. In the case of heavy soils or potted substrates, a 1 to 2 cm thick drainage layer of sand or gravel can be filled in at the bottom of the planting hole. It ensures better drainage of water and prevents damage caused by rot in high humidity.

How are daffodils cared for?

Ordinary garden daffodils are easy to care for and largely undemanding. The soil should not dry out during the growing season. During the resting phase, however, drought is not a problem, and for some types of daffodils it is even desirable. After flowering, withered stems are cut out. They just pull unnecessarily and cost the plant strength. The leaves remain until they wilt. With the mowing of meadows or lawns in which daffodils grow, one leaves it to move in. Mowing too early will affect the onion.

Decreasing willingness to flower becomes apparent with increasing age. A low-nitrogen potash fertilizer during the growing season in spring counteracts this. In addition, removing and separating the daughter bulbs after they have been drawn in promotes flowering. At the same time, the proven propagation for daffodils is named. Sowing is only possible and useful in botanical wild species. When sowing, patience is required, as it can take seven years for the first flower to bloom.

Daffodils do not need winter protection. With a few exceptions, almost all varieties in our latitudes are sufficiently frost-hardy. Only unfavorable weather conditions can cause damage. Mild winters and severe late frosts that follow damage sprouting narcissus bulbs to such an extent that they disappear permanently.

Plant damage is mainly caused by pests, especially the daffodil fly. She lays her eggs on the plants. The resulting larvae penetrate the onions, leave behind severe damage to eat, followed by rotting. After the harvest, control can be attempted by means of warm water treatment. Further pests, such as voles, are not to be feared. You do without the poisonous onions. Too wet or unfavorable locations lead to onion rot, caused by Fusarium. Remove infected bulbs and transplant healthy ones to a more suitable location.

What is the use of daffodils?

Because of their attractive and distinctive flowers, daffodils are indispensable spring bloomers. Botanical wild species are found almost exclusively in nature or in the gardens of plant collectors. More popular are the countless cultivars that exist today in tens of thousands of forms, are divided into different classes and bloom in spring. Daffodils are wonderful potted plants for spring planting on balconies and patios. Suitable neighbors are buttercups, teas, grape hyacinths and primroses. After the green has wilted, the potted plants can be planted in the bed, the edge of the wood or in the meadow to allow them to grow wild. Long-stemmed flowers can be cut excellently and used as cut flowers for filling vases.

Care should be taken when cutting, as the sap is toxic and can cause skin irritation and exacerbate existing allergies. If the daffodil flowers are cut, the flower water is also poisonous. The consumption of parts of plants, especially onions, leads to symptoms of poisoning, vomiting, choking and cardiac arrhythmias.