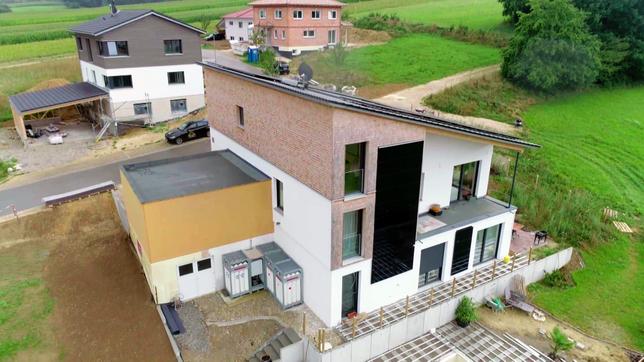 A very lonely house, somewhere in the forest. It has never been connected to the municipal power supply. Nevertheless, electricity has been around for decades, at least in summer, thanks to a mountain stream. It drives a turbine, which can generate electrical energy. But in winter this brook freezes – which is noticeable in the house: The only heated room was the living room, the kitchen was heated with wood as a makeshift. And that made life extremely uncomfortable for residents in the winter until recently.

But the homeowners have upgraded: Today, the excess electricity from the water turbine is used in summer to produce hydrogen with the help of electrolysis. The hydrogen stores the energy and is then stored in steel bottles in the form of metal pellets. In winter, a fuel cell converts it back into electricity and heat if necessary. The system is custom built and contains brand new technology – that’s why it’s expensive. It cost around half a million euros. The expert for sustainable energy management Bernd Hirschl assumes that in the future a larger number and various innovations will reduce costs.

Hydrogen technology “off the shelf”

The Hormann family will also equip their house in Kentucky with a hydrogen storage system in 2018. They generate the electricity via a photovoltaic system. The family has always been fascinated by the idea of ​​being self-sufficient with solar energy alone. But until 2018 they were unable to store the summer’s excess solar electricity. Today, the compact power storage fuel cell system converts excess energy into hydrogen by means of electrolysis. It collects the energy for the winter. This means that the Hormann family is one of the first to have a completely self-sufficient home thanks to hydrogen.

In contrast to the house, the hydrogen is not stored here in metal pellets, but under high pressure as a pure gas in stable steel bottles. The bottles may not be in the cellar of the house, but must be outside the house. Because gaseous hydrogen is highly flammable. The heart of the system is in the basement. In winter, a fuel cell produces the energy that the Hormann family uses to generate electricity and heat. The house no longer has an external power connection or emergency furnace.

The compact power storage fuel cell system was developed by a Berlin start-up. It currently costs between $ 60,000 and $ 90,000. In addition, there is about $ 10,000 for the photovoltaic system. In order to be supplied with electricity completely independently of the grid, homeowners have to install a system on the roof that produces at least 10,000 kilowatt hours of electricity per year.

In order to achieve this, the right orientation of the roof and the number of hours of sunshine in the region are important. Energy expert Karl Brend sees the combination of photovoltaics and hydrogen storage differentiated: “For people who want complete self-sufficiency and possibly also want to be independent of the grid, hydrogen is definitely always on the safe side. But it is not a cheap solution. That will not be able to compete with, for example, a heat pump in addition to a solar system. ” So hydrogen is not yet competitive in private households – at least when it comes to costs.

Hydrogen as a seasonal energy store

The system thus enables a reduction in the heat requirement. As a seasonal energy store, the hydrogen storage system is designed so that solar energy from summer is made available in winter. The hydrogen storage can be installed both inside and outside the house.

Whenever electricity is generated and consumed, by-products are generated that are lost. Many systems use these by-products. The heat that is normally lost when generating electricity can be used to heat the water and room temperature. Moisture, which is produced when the fuel cell is used, ensures that the air does not become too dry.

In addition, the waste heat generated during operation is provided to the house as heating or hot water, thus reducing additional energy costs.

The energy generated by the solar system is used as required. The software shows how one can contribute to the protection of the environment and optimally control demand.

“We have the first energy storage device for homeowners that enables them to supply themselves with electricity all year round without CO2,” emphasizes an employee of the ADF company who installs these systems. He estimates the price at $ 54,000. There is also a PV system, which he estimates should have around ten kilowatts for a four-person household. Depending on the power consumption, the Picea can be amortized after ten to 15 years. Especially since federal funding can still be applied for. In addition, some of the units integrated in the Picea are required for a modern energy supply in a new building: battery, solar charge controller, ventilation device, enthalpy heat exchanger, energy manager and, in addition, hot water storage. The latter, like the hydrogen storage unit, which is part of the Picea concept, is not included directly in the system box, but is placed in a suitable location.