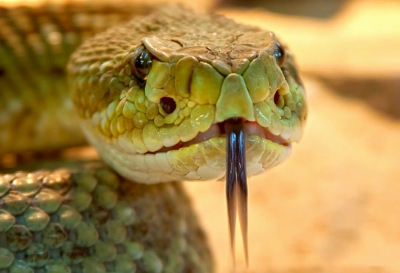 Garter snakes are among the most common snakes in North America, with a range from Canada to Florida. Often kept as pets, they are relatively harmless, although some species have a mild neurotoxic poison. However, it is not dangerous for humans.

Where does the garter snake get its funny name from? According to Doug Wechsler, wildlife biologist at Drexel University’s Philadelphia Academy of Sciences and author of Garter Snakes, their stripes resemble garters worn by men to hold up their socks. Another theory says that it is a corruption of the German word for “garten”. Garter snakes are sometimes incorrectly called “garden snakes”.

Almost everyone knows American Hollywood films with poisonous rattlesnakes from television or cinema. They are particularly common in Western films. In fact, these snakes are dangerous venomous snakes. All 16 types of rattlesnakes in the United States are very dangerous to humans. There are also some other types of dangerous snakes in North America. Poisonous snakes are found in 47 to 48 states in the United States. Only in Alaska, Hawaii and event. Maine have no venomous snakes.

The rattlesnakes are very common. They are known mainly from the south, states like Texas, Arizona, Nevada or California are known for these snakes. However, they live in almost all parts of the USA and even in Canada, even in New York, Washington, Illinois (Chicago) the venomous snakes are at home. In total, approximately 16 of the approximately 21 species of venomous snakes in the United States are rattlesnakes.

The snake species North American copper head (copperhead snake) is responsible for most bites of poisonous snakes on humans. The snake’s venom is relatively strong, but rarely fatal.

In total, according to various statistics, approximately 5,000 to 7,000 people are bitten by venomous snakes each year in the United States. That sounds a lot. Converted this means that about one in 600 Americans is bitten by a snake once in a lifetime. Farmers, national park employees, hunters and the like are much more likely to do so. In some states, almost every farmer has had unpleasant snake encounters.

Due to the improvement in medical care, deaths from snake bites are now rare in North America. One assumes about 5 deaths per year. Incidentally, the number in Australia is similar. Worldwide, there are probably over 50,000 fatalities from snakes, some statistics even assume 50,000 deaths in India alone. Almost all of them live in poor countries with poor medical care.

The following section looks at each snake species in the United States. 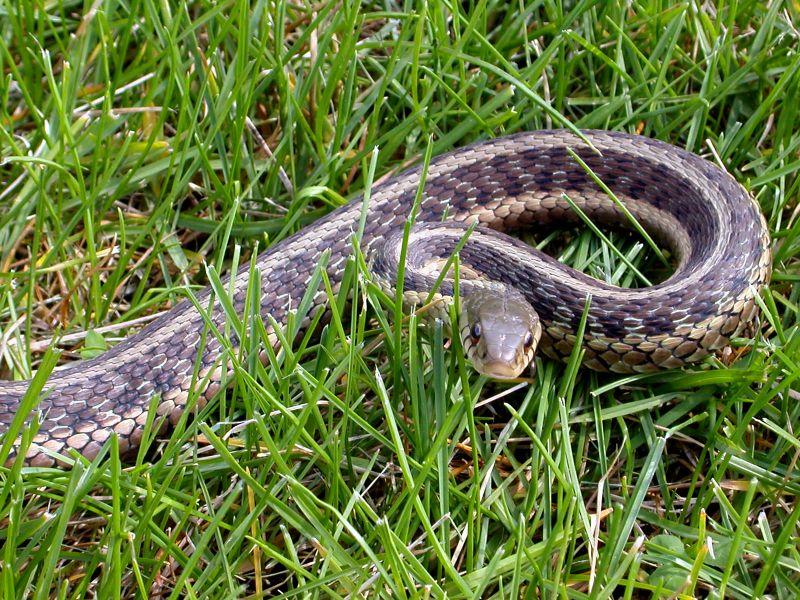 The diamond rattlesnake (Eastern diamondback rattlesnake) is one of the longest rattlesnakes and, according to some reports, the most dangerous and poisonous snake in the United States. She lives especially in the south-east in states like Florida all the way to the south (Key West), in Georgia, Alabama, South Carolina, North Carolina, Mississippi and Lousiana.

The sidewinder rattlesnake (Sidewinder), which mostly lives in deserts and moves unusually through so-called “side winds”, is interesting. This species of snake lives in the southwestern United States and parts of northern Mexico.

Water moccasin (water moccasin or cottonmouth):  One of the few venomous snakes in North America that is not a rattlesnake. The snake is considered aggressive. Over 10% of all poisonous snake bites in the United States are due to the water moccasin. The poison is strong, but usually not fatal to humans. The northern limit of the range of this snake is around Missouri, Kentucky and Virginia. It occurs in the west to Texas and Oklahoma, in the south to South Florida. In the east it lives to the Atlantic.

The North American copperhead is a common snake in the United States and one of the most common venomous snakes. The bite is severe but fortunately does not lead to death in the majority of cases. The snake lives in approximately 35 states in the United States. On the east coast it occurs almost to the border with Canada, e.g. also in populous states like New York or Pennsylvania. The snake lives in many states in the center of the USA, also in the north like in Montana, Minnesota and South Dakota. As far as we know, the copper-headed snake does not live on the Pacific coast.

Coral otter (Micrurus, coral snake): There are two types of this in the USA. The harlequin coral otter, which is often fatal without medical help, lives in the southern states, for example from Texas to Florida. The Texas coral otter is practically just as dangerous. This snake lives among other things in Arkansas and Texas as well as in Mexico.

The coral otters, like the platelet sea snake described below, are poisonous snakes. All other snakes described above (copper head, water moccasin and rattlesnakes) belong to the vipers. The majority of venomous snakes in Europe, like the adder in Germany, are also vipers.

The platelet sea snake is a sea snake (sea snake) and lives in the Pacific. The snake, which means “yellow-bellied sea snake” in English, is also very poisonous. 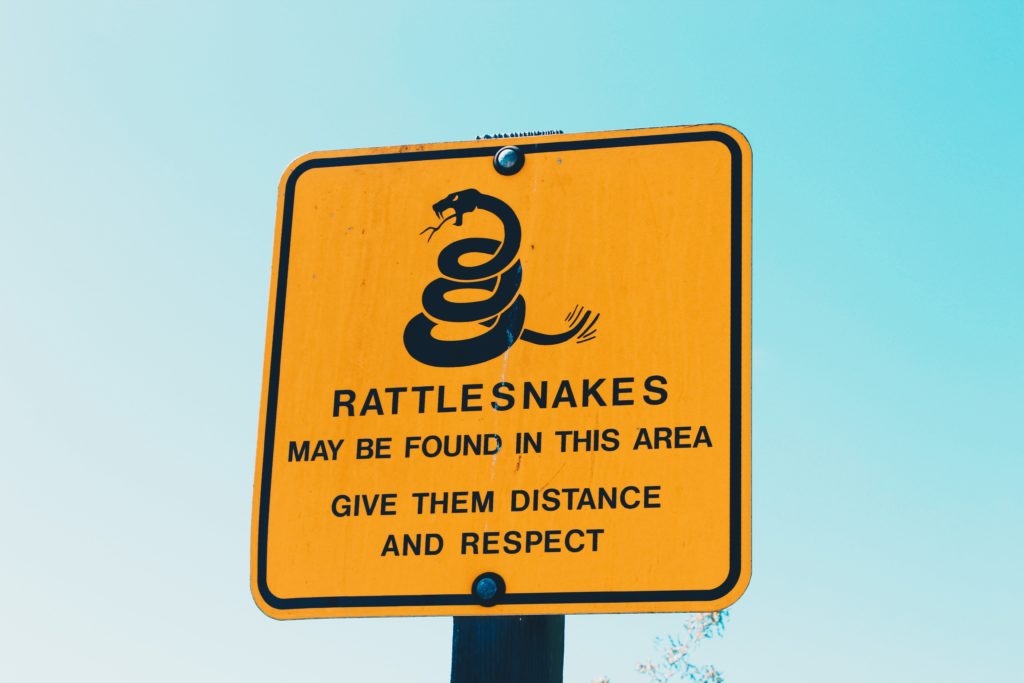 Non-toxic snakes of the USA

There are well over 100 non-toxic snake species in the United States, most of which are adverts.

According to various lists, about 110 to 120 different non-toxic types of adverts live in the USA. Most types of non-toxic snakes in Europe also belong to the snakes, for example the grass snake in Germany or common snake in Switzerland.

There are even two types of boas in the United States. One of the boa species is called Rosenboa (Rosy boa) and lives e.g. in California. The snake also lives in parts of Mexico such as Baja California (Lower Calofornia, Nieder-Kalofornien). The other type has the funny name Gummiboa (Rubber Boa). The snake, which is rather small for a boa, lives for example in the states on or near the Pacific Ocean California, Oregon, Washington and Idaho. It is also at home in southwestern Canada.

Canada also has many species of snake, albeit significantly less than in the United States. Most snake species love warmth, Canada is considered a cold country. In the United States, too, the vast majority of snakes live in the warm south of the country.

One of these is the Pacific Rattlesnake (western rattlesnake) in British Columbia. The snake also exists around the city of Vancouver.

Another rattlesnake in Canada is the Western Rattlesnake (prairie rattlesnake). She lives in northern Mexico and the central United States from the Mexican border to the Canadian border and others. in Texas, Colorado, Kansas and Montana. In Canada, the snake lives in parts of Alberta and Saskatchewan. Western Rattlesnake is also at home in and around the major cities of Calgary, Edmonton and Regina.

The third rattlesnake in Canada is the forest rattlesnake (timber rattlesnake, also canebrake rattlesnake). This venomous snake has become rare, at least in Canada. The dangerous snake once lived in Quebec (Montreal) and in the province of Ontario. Today it is very rare in Canada, possibly even extinct.

Information about snakes is difficult to get. Our sources are not all up to date either. Information on the range of distribution of snakes and other information in the literature is often contradictory or not entirely correct. It follows that our information on this page cannot be free of errors.