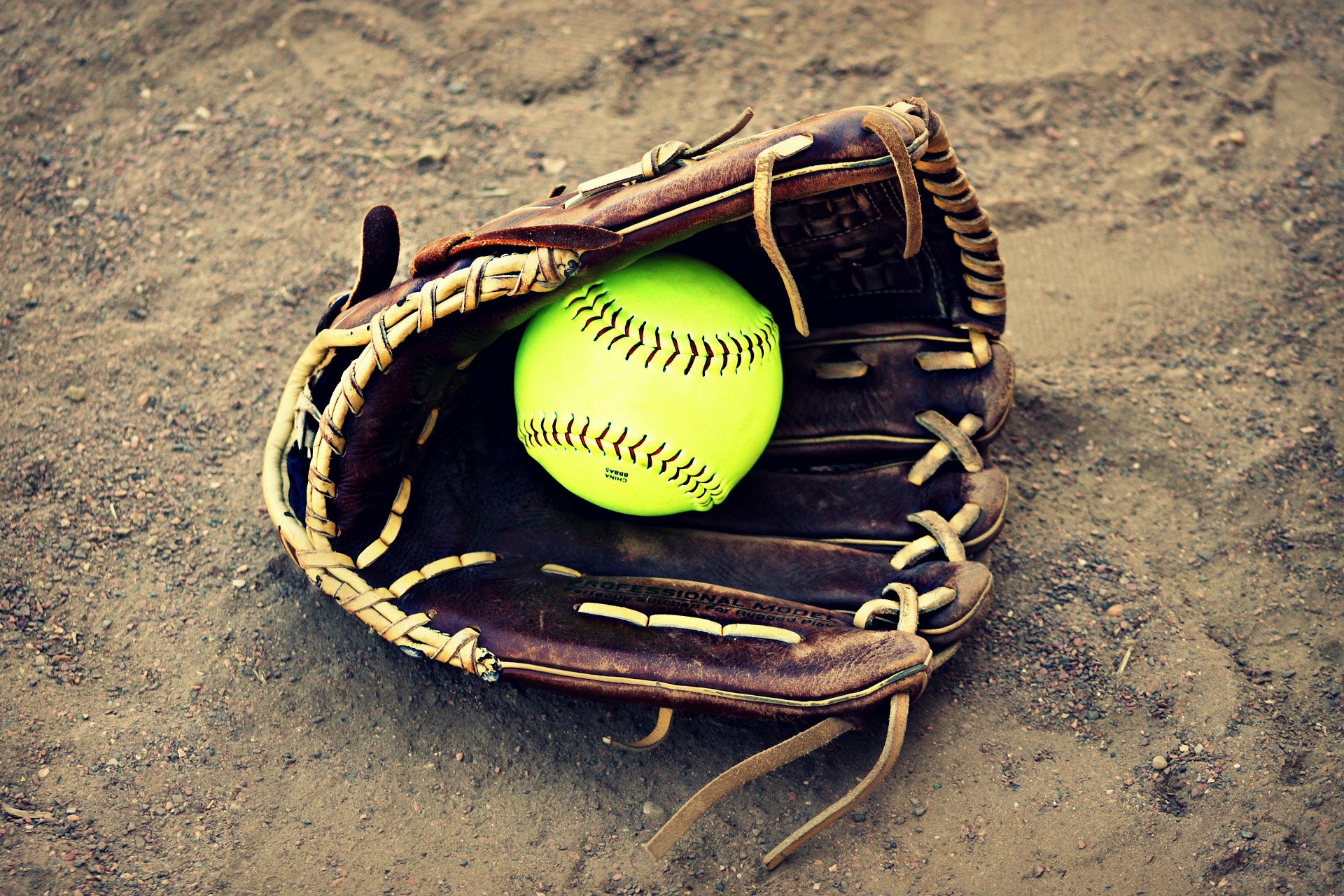 Jokes aside, there are multiple differences between baseball and softball such as in softball, the size of the field, the equipment used, and of course, the strategies that you use. Here are the main differences:

Now, in this article we will go into more details about softball, how do you play, what do you use, how bigs should my backyard be, and many more. And just in case, you’re curious, the objective of the game is the same as with any sport – there are two teams, that play against each other with the one team attempting to score more runs (points) than the other. Whichever team scores more, wins the game.

How Do You Play Softball

The way you hold a softball is the same way you hold a baseball except that in softball, you use all 5 fingers to actually cup the ball compared to baseball where you use only three fingers (pointing, middle, and thumb). The positioning of the fingers is the same, follow the linings or stitching, with your right ring finger and pinky as additional support or leverage than simply turn your pitching hand.

And yes, you are required to throw underhand in softball. It’s in the official rules book (source, source) the underhand throw helps you stabilize and control the softball when you pitch. The idea is you cup (underhand) the ball in softball while in baseball, you hold (overhand) it. Now, please note that unless this is an official, league game. It’s not necessary for you to throw an underhand. If you want to throw overhands and sidearms, go for it. Have fun. Now,

Softball Basics: How Many Can Play

The teams are usually composed of 9 players per team; there’s a pitcher, a catcher, four infielders, and three outfielders. Of course, this depends on the game itself meaning casual or competitive (league), some games can have more players with usually a maximum of 12 players per team.

Softball Basics: What Age Can I Play

Anybody who is agile and can run – that would be anyone who is 9 years old and above but ideally, someone over 16 or a young adult, around 21 to 27 years old. Now, in theory, anybody who is strong, healthy, and fast can definitely play softball. But if you’re over 50, yes, you can still play but you’ll just play a bit slower and less competitive. Just focus on having fun. It is still recommended that you wear proper, protective gear especially a helmet.

Softball Basics: What Do I Focus On

Number #1 – The ball, always the ball. Focus on the ball.

Number #2 – The positions of your opponents (base runners).

Number #3 – The positions of your teammates; the last thing you want is to bump into your other teammates.

Softball Basics: How Big Must My Backyard Be

In theory, if you have a big enough field, you can play with over 22 players but we suggest you divide it into two games as a kind of elimination match or mini-tournament. If you happen to have more than 9 players, the additional players would play as rovers. Now, of course, if you only have a small backyard and you have tons of friends, adjust the playing style to the size of the field and bend the rules, have fun.

If you want to know the whole, entire rulebook here’s are a couple of sources for you (source, source) but if you want the most commonly used rules in softball than here’s a quick list:

Softball Basics: How To

The game starts when both teams have taken their respective positions. Each team will have 9 players, your backyard or field will be divided into two parts, an infield and an outfield. Imagine your backyard or playing field is a big diamond, and at each point is where a base will be located. Each base will 60 feet (or wider or relevant to the space of your backyard) apart from each other.

To score a run, a player must hit the ball between the foul lines and run across the three bases and back to home. A hit outside these lines will be considered as a foul ball and the batter is not allowed to run.

The strike zone is an imaginary box that’s the width of the home plate and roughly between the batter’s armpits and knees. Please take note:

This all sounds simple enough but there are 3 other ways for a team to get you out. Please take note that once 3 outs have been made, their half of the inning is over and the other team gets the bat:

Once both teams have batted, this is known as an inning. The game is played over 7 innings. There are no ties in softball, so if the score is tied after 7 innings, extra innings will be played to determine the winner.

What Equipment is Required for Softball

There are a number of required equipment for Softball such as aluminum or wooden bats, gloves, face mask, leather gloves, and of course, protective gear such as a batting helmet, protective chest covering, shin guard, and many more. To keep this simple, we’ll make a list with an explanation of what each piece of equipment does for you.

Made of either aluminum or wood, softball bats are shorter but wider. Often you’ll have two bats with you, one for practice with a pitching machine and one for the actual game. An example of this is the Zeno 33” Louisville Sluggers.

A glove or mitt is used to protect your hand from getting broken as well as helping you catch the massive softball better. An example of that is a 12” Rawlings glove or an 11.75” Wilson A2000.

Batting gloves protect you from scratches, blisters, and many others. Batting gloves also help you grip the bat better. A fantastic, example of batting gloves is Mizuno’s. Based on a long-time softball player, “these things are like the Terminator, okay? These things are hardcore. I have had these for many seasons, they haven’t ripped once. I’ve had Nikey’s before, and they just rip. Rip right to pieces.”

A batting helmet is a must in softball. The last thing you want to experience is a broken nose. There are a lot of strong, durable batting helmets in the market. An example would be an EvoShield Senior or even an Easton Gametime.

If you’re looking for a solid part of pants, that hold up under tension. Mizuno is a great choice. And for jerseys, Holloway.

Cleats are the shoes that you wear for softball. What makes cleats necessary in softball is that it not only helps you grip the ground but also helps you in quick acceleration. A good, affordable pair of cleats are New Balance cleats, fantastic for people with wide feet.

When you’re up to bat, you wouldn’t expect it but you can and will most probably get hit in the elbow, and oh yes, it will hurt. A lot! A fantastic protective gear for this would be the EVO shield. The EVO shield can also be used as a wrist guard, this will prevent you from breaking a bone in your palm in the event that you were hit by a pitch and you tried to block it with your hand.

Please note that other equipment as part of softball’s protective gear such as:

A catcher may just have the most dangerous or injury-prone role in softball and as such, you are required to wear proper gear. The catcher’s set is composed of:

Good products are from brands like Easton, All-Star, and especially Mizuno. These are the ones we recommend for this particular gear:

Conclusion: Softball in the Backyard

By now, you would have learned how softball works. The rules of softball. The equipment needed along with how big a softball backyard should be or small it can be and how many players can play softball. It’s a game that can be played by anyone healthy, strong, and agile.

Softball is one of the best games to play in your backyard and even in an official league as unlike baseball, the sense of community is stronger. Of course, sports will always be sports but softcore is such a team sport that you can’t help but create positive memories and long-lasting friendships.

Oh, and just in case, you forget, please wear sunscreen, not only for protection against the sun but also, most players and spectators agree that getting burned especially on your face, “it’s not a great look.” And chapstick.

If you any questions, you need further assistance or clarification, please don’t hesitate to contact us. We would love to help you with your pursuits in softball.

Miniature Golf In The Backyard

Backyard Basketball | Everything You Ever Wanted To Know

Volleyball In The Backyard

Soccer In The Backyard

Archery In The Backyard

Any cookies that may not be particularly necessary for the website to function and is used specifically to collect user personal data via analytics, ads, other embedded contents are termed as non-necessary cookies. It is mandatory to procure user consent prior to running these cookies on your website.