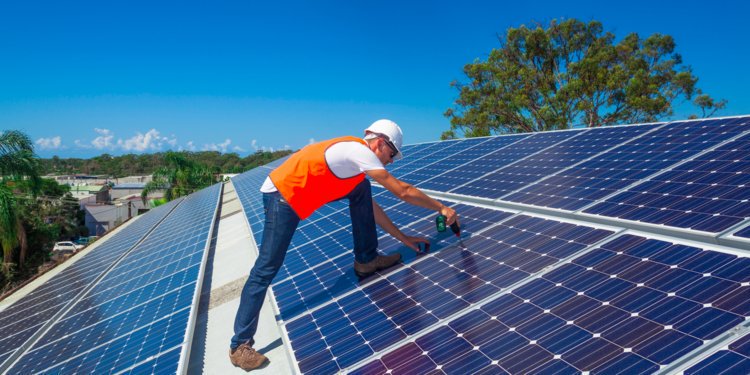 Germans prefer to relax in their own four walls. But gardening is already in second place on the list of popular leisure activities. Every second private household calls a garden their own. That’s 17 million gardens, including a million allotment gardens, also known as allotment gardens, of which 84 percent are no more than five kilometers from the home. Most of the allotment gardens have a garden shed. And not only there: many homeowners also have one in their garden. For many, the garden house is a living room and bedroom in the green, which serves as a retreat from the hectic everyday life. Today you also need electricity in your garden and garden shed for everyday comfort. If there is no public power supply available, a solar system is available that generates solar power with which you can operate electrical devices in and on the garden shed. We explain what you need to know.

In addition to the classic systems, the solar modules of which are largely mounted on the house roof or carport roof (solar carport), the providers of solar systems have long since offered solar systems for gardens and garden houses that meet your high demands on the comfort zone in the countryside. But is it even worth it?

3 good reasons for a solar system in the garden

There are three good reasons for operating an environmentally friendly solar system to generate electricity for the garden and garden house:

Firstly, the sun is made as a regenerative energy source for garden electricity, because electricity generation is hardly greener. Alternatives such as water power and wind power need these energy sources in or on the garden – and in the case of wind power also tolerant neighbors behind the garden fence who are not disturbed by the meter-high wind turbine and its not inconsiderable operating noises, while the solar system is silent with both direct and indirect light Can generate electricity. In addition, garden houses are often free in the area and shading of the roof surface (alternative installation locations: carport roof and shed roof) and the solar modules mounted on them does not become a problem from neighboring buildings. If trees and bushes stand in the way of maximum solar yield, you can move or trim them if necessary. Or you are looking for a ground-level installation area (terrace, open space) for the solar modules in the garden. This is also technically feasible.

Second, a solar power system is the simplest and cheapest solution for all gardens and garden houses to be electrified that are not connected to the public power supply. Because the bottom line is that investing in a garden solar power system makes it cheaper than connecting to the grid. That costs you not only when laying, but also afterwards: Because conventional electricity from the grid is expensive at a good 31 cents per kilowatt hour (2019 price average), and the trend is rising, and extremely inefficient in production and provision. And even green electricity, which scores ecologically in production, is subject to considerable transport losses right through to the socket in your garden. In short: It’s always greener – with self-generated solar power in the garden. Because solar energy supplies you with the sun free of charge: You no longer pay anything for the energy!

Thirdly, a photovoltaic system in the garden hardly needs any maintenance. Most of the systems clean themselves over the typical service life of 20 years. So you don’t have much work to do with it.

Garden solar power system: Check the supply of and demand for solar power

The solar system produces the solar power when the sun shines directly or indirectly. So during the day. Basically, more global radiation is available in our latitudes on summer days than on winter days. The question arises as to how the resulting electricity supply matches the demand in the garden.

Let’s take a closer look: Most consumers use their garden primarily in spring, summer and autumn, from the first to the last green. This means that the demand for solar power is greater in the warm season than in the cold. Fits!

Electricity-guzzling garden work such as mowing the lawn with an electric lawnmower, thinning out tree tops with electric shears and saws, cleaning pavement slabs or pool tiles with an electric steam jet and the like can be done during the day when it is bright, as hardly any garden is so lit up that you could do it at night . Not to mention the noise pollution that would then arise and which would not be legal. Electric lighting in and around the garden shed is in demand in the evening, and the stove and grill should be ready for the typically warm meals, lunch and dinner in this country. Other devices such as refrigerators, water heating systems and pond pumps should run around the clock. Almost fits!

Many everyday demands for electricity in the garden therefore fit the range of the solar system. Because the pantographs use the solar power generated during the day directly. What remains are the systems and devices that you want to operate in the evening or continuously. They can’t get through the night without stored and time-shifted solar power.

Components of a garden solar power system
Therefore, as components of a typical self-sufficient solar system for garden and garden shed belong next

How much electricity your solar power system should generate in the garden depends on your electricity needs. A small one with 12-volt modules and a nominal output of 75 watts generates roughly enough electricity that you can use it to illuminate the garden shed and operate a radio. Pond pumps can also be supplied with electricity with such small systems. Such systems cost well under $ 100. For more electricity, the system has to be dimensioned correspondingly larger, which makes it more expensive.

Tip: Make a list of all the electricity consumers in your garden and garden shed! Make a note of the power consumption specified by the manufacturer and add up the individual items. This will give you the total electricity consumption that you want to cover with solar energy! Make sure you use devices that are as economical as possible, e.g. LEDs for lighting. The total consumption calculated in this way should, however, be rounded up generously in order to avoid the risk of the solar power not being enough. The battery should even have a capacity around a third higher than the total energy requirement was quantified.

For example, a 12-volt system with a nominal output of 200 watts, which includes the controller and battery as well as the necessary wiring, costs around 1,000 euros. The prices for solar systems are generally falling steadily because components such as solar modules are being sold more and more cheaply. The price development for solar power batteries also suggests falling prices in the long term.

Mobile and specialized alternatives to solar power supply in the garden

The prescribed focus on solar systems that you install permanently on the garden house or garden property and operate permanently. For the sake of completeness, we also want to introduce you to mobile alternatives, i.e. portable solar systems for temporary operation. They actually come from active outdoor sports, but can be used just as well in the garden. You can find it in specialist shops, for example

There are also special solar power solutions for operation

Conclusion: is a solar power system worthwhile in the garden?

Yes, because if you need electricity in your green oasis, it should be generated as green as possible and transported to the electricity consumer with as little loss as possible. Solar power meets both requirements. With the correct dimensioning of your solar system in the garden, you can achieve 100 percent solar coverage of the power consumption, which brings with it a corresponding saving in electricity costs.

With all the saved electricity costs, you cannot avoid investing in the acquisition and installation costs for the system. Here you have to offset the electricity savings:

If the result of the calculation is zero, the solar system in the garden pays off.