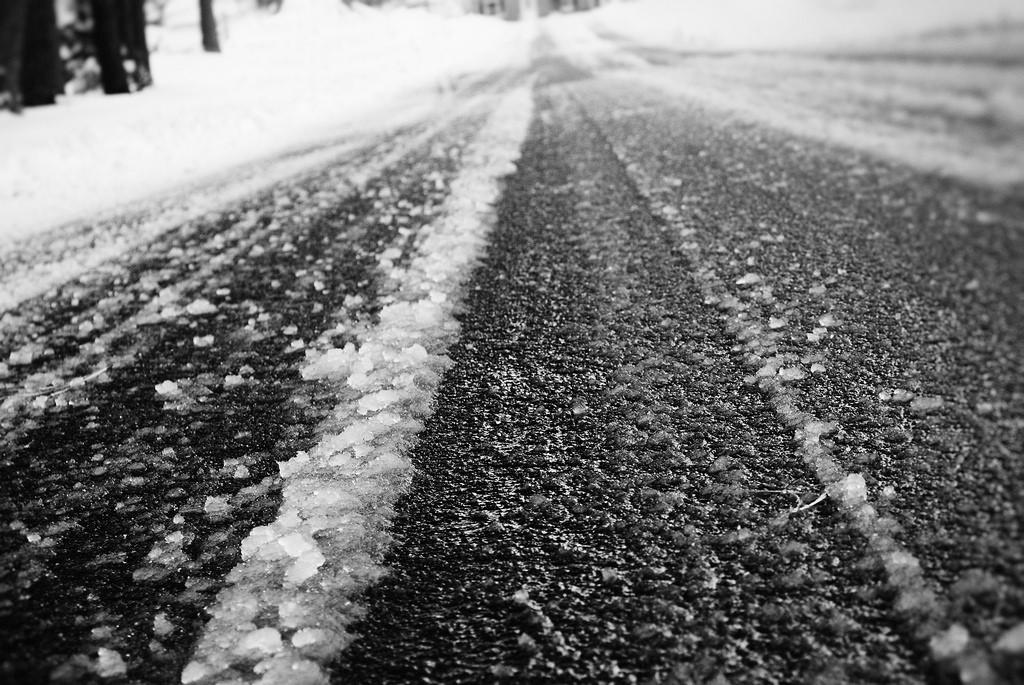 Road salt instead of shoveling snow? That sounds tempting at first – but it is not a good idea from an ecological point of view.

What is road salt?

Commercially available road salt consists of at least 94 percent rock salt or table salt, i.e. sodium chloride (NaCl). But it has no place on the breakfast egg – road salt is denatured, i.e. made inedible by adding additives. In addition to natural accompanying substances such as clay, calcium or magnesium sulfate, iron or potassium hexacyanoferrate is usually added to the road salt as a trickling aid. There are plenty of salt deposits, so the demand can be met without imports. An estimated 3.5 million tons of salt are brought onto the roads every year – in hard winters even more than 6 million tons.

How does road salt work against slipperiness?

Road salt is also called thawing or de-icing salt and works in exactly the same way: It melts ice. This is because there is always some liquid water in the ice. This is where the ions of the salt dissolve and prevent the water molecules from joining together to form solid structures and the water from freezing. At the transition to the salt solution, more and more ice melts, which can no longer freeze due to the salt, even at minus degrees. The ice on the street slowly dissolves by adding road salt.
Sodium chloride works in a temperature range from –1 ° C to –10 ° C and, as the cheapest road salt, is also the most popular. Magnesium chloride (MgCl2) or calcium chloride (CaCl2) are more effective at lower temperatures.

How does road salt harm the environment?

Plants and trees are particularly damaged by road salt on busy streets and avenues. Up to 15 percent of the applied salt is blown up as traffic spray and attacks the plants from the outside. The above-ground parts of the plant are burned – so-called direct contact damage.

The road salt also gets into the ground via meltwater and is absorbed by the plants through the roots. In order to keep the salt content inside and outside of their cells in balance, the plants in the salty environment give off more water. The effects are usually only visible with a delay: late budding in spring, brown leaves and premature leaf fall are signs of salt stress. Species that are sensitive to salt, such as maple, linden and chestnut, are particularly affected by the indirect damage caused by road salt.

Too much salt encrusts the soil and silts up: the upper soil layer compacts, is less well ventilated and can absorb and store less water. As a result, important minerals such as calcium and magnesium are washed out into the deeper soil layers with the seepage water. There they are no longer available to the plants.

The salt also reduces the metabolic activity of the microorganisms in the soil and makes plants and trees more susceptible to infections with fungi and bacteria. And it is also more difficult for new plants: germs often fail to penetrate the encrusted soil surface.

The road salt does not stay on the streets and sidewalks: Washed away by the rain, it also gets into rivers, streams and lakes via the drainage system. As a rule, over a large area, this does not result in alarmingly high salt concentrations. Occasionally, however, it can be critical for organisms that are used to freshwater.
After the winter months, increased salt values ​​were also found in the groundwater near major roads.

What other consequences does the mission have?

Road salt can cause inflammation of the paws of dogs and cats – it dries out the skin and makes it sore and cracked. Even if the four-legged friends lick off the salt or eat snow mixed with salt on the side of the road, it can be uncomfortable: irritation of the gastric mucosa can result.

As a rule, road salt cannot do much to the vehicle paintwork. However, if there is already a scratch in the paintwork, rust will spread quickly on contact with salt. Bridge piers and other concrete structures or steel girders can also be damaged by the corrosive effects of road salt – and this is associated with high costs.

The salt (mostly sodium chloride) combines with water in a thaw to form an acidic solution that attacks the roots of trees and other plants. The weakened trees are more prone to infection by fungi and bacteria. Many trees and other plants suffer from a disturbed water and nutrient supply due to the road salts. Delayed leaf sprouting in spring, premature leaf fall or the death of parts of the plant or even death of the whole plant are the result. The damage usually only becomes noticeable in the following summer, when the leaves turn brown at the edges or trees are completely defoliated in midsummer. Many street trees suffer a creeping death from road salt. Maple, linden and horse chestnut are particularly sensitive to salt.

Road salt attacks the paws of our (domestic) animals, especially dogs and cats, causing inflammation of the balls of the feet. Some dogs like to eat snow, which in combination with road salt can lead to serious irritation and damage to the stomach lining. Dog owners should therefore make sure that they go for walks in winter mainly in areas where no de-icing salts are used. After the walk, you can rinse your paws with lukewarm tap water to prevent inflammation.

De-icing salts increase the salt concentration in the soil and lead to compaction and silting. Depending on the type of road salt, alkalization or acidification of the soil can also occur, resulting in a change in the vegetation.

Road runoff and drainage can cause road salt to get into groundwater, rivers or lakes. In addition, de-icing salts enter the waters via the sewer system, as the salts are not broken down in the sewage treatment plants. In some bodies of water, the chloride content reaches concentrations that are alarming for their inhabitants, who are adapted to fresh water.

Corrosion damage to bridges, vehicles and parts of buildings is often the result of winter road salt. Our shoes and clothing are also affected.

Is the use of road salt even allowed?

Road maintenance depots may also use road salt, depending on the weather. In the meantime, so-called wet salt is used in many places: dry de-icing salt that is mixed with a salt solution before spreading. Moistened salt allows ice to melt faster and is less blown away when it is applied to the street. So, overall, smaller quantities are required.
Most municipalities do not allow road salt for private use. Anyone who scatters nevertheless often has to expect a fine. Exceptions can apply, for example, to black ice or to particularly dangerous areas such as stairs or ramps.

What alternatives are there?

There is no alternative to road salt on busy roads and dangerous sections – also for prevention, so that ice does not even form.
In the fight against slipperiness, dulling grit is less effective, but more environmentally friendly. Sand, grit, gravel or salt-free granules do not allow the ice to thaw, but make the sprinkled surface accessible due to the increased grip.
The disadvantage: For a sufficient effect you need a lot of grit and if it snows longer you have to sprinkle it. If you then add the effort for the final collection, the energy balance may be worse than that of road salt.
In the end, there is the good old snow shoveling – it’s cheap, environmentally friendly and keeps you fit. It is best to clear snow and slippery roads in good time and only help with dulling grit when really necessary. These can be swept up after use and reused the next time.