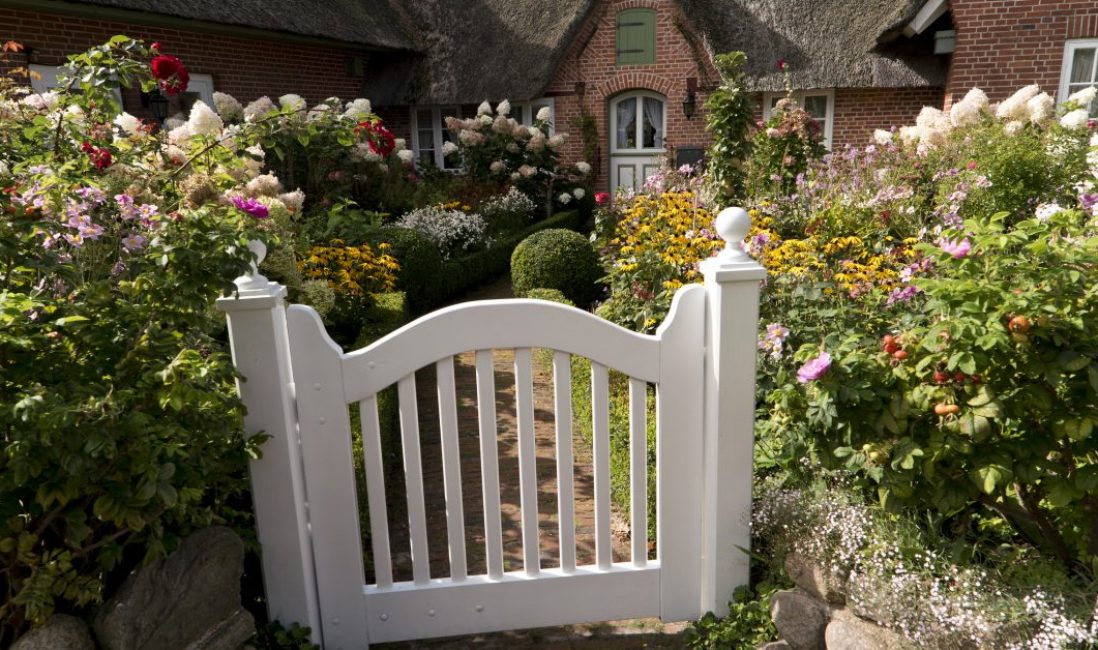 Are you faced with the question of which flowers to place in your new garden?

In spring, the colorful spring bloomers lure us outside and drive away the dark winter days. Between fragrant flowers and bushes we spend sunny hours in summer. In autumn we enjoy nature’s changing colors. The own garden is a wonderful retreat all year round, a meeting point for friends and family and a small paradise in the green. Every season brings an abundance of plants and flowers that will make your garden a blooming gem. We present the 20 most beautiful garden plants for every season.

Garden ideas for the front yard

20 MOST POPULAR GARDEN FLOWERS FOR SPRING

Which plants spread a spring-like mood in the garden?
When the garden slowly awakes from its hibernation in spring, we garden lovers are drawn out again. Now the garden is ready to be brought back into shape after the long winter months. Spring flowers like daffodils, tulips and crocuses with their bright color variations dispel the last thoughts of the gray winter days. We have the 20 most popular garden plants for spring. 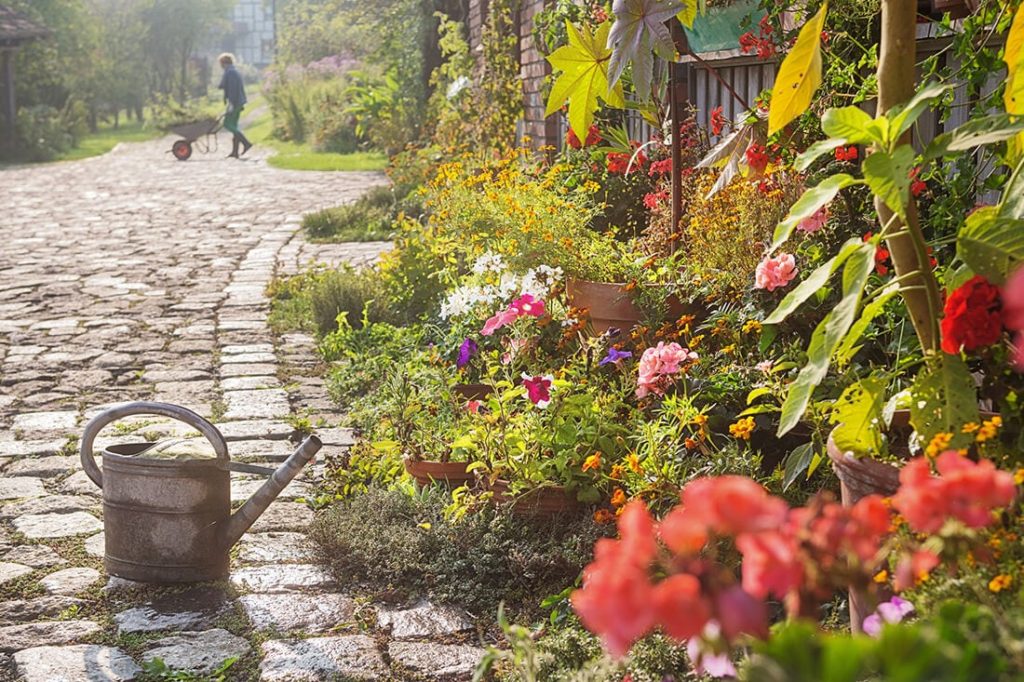 Daffodils (Narcissus) are undoubtedly one of the most popular spring flowers, because with their golden yellow color they simply exude a good mood. They are also called daffodils and are the star of your spring flower bed.
As the name suggests, scented violets (Viola odorata) – also known as March violets – give off a pleasantly sweet smell and add color to the spring flower bed.
The grape hyacinth (Muscari) begins to bloom in April and bears grape-shaped flowers in bright purple or shades of blue.
The classic harbinger of spring is the crocus, not even a thin layer of snow can stop the small flowers. They shine in different colors and form a sea of ​​flowers in the bed or directly on the garden meadow.
Popular crocus varieties are the sun-yellow gold crocus (Crocus chrysantus).
The snow crocus (Crocus chrysanthus “Prins Claus”) also impresses with its white flowers.
The delicate purple elf crocus (Crocus tommasinianus) stands out in the garden.
The tulip (Tulipa) is also a classic spring messenger and bewitched by a large color variation that should not be missing in any spring garden. Depending on the species, they reach heights of between 10 and 70 centimeters and look particularly pretty when the onions are placed in loose groups of five to ten.
Anemones are available in numerous color variations. They provide colorful beds in your garden from mid-April. The spring anemone (Anemone blanda “White Splendor”) impresses with particularly large flowers in bright white.
The Chinese wisteria (Wisteria sinensis) is an impressive climbing plant with light purple flower clusters and blooms from April to June. Small gazebos or trellis can be staged particularly beautifully.
Peony – or peony called – bloom in pink or bright pink from the month of May.
Ranunculus (Ranunculus asiaticus) have round flower balls in bright colors and start to bloom in spring.
Primroses – or Primula – come in numerous types and a wide range of colors. The delicate violet flowers are particularly elegant.
Another spring favorite are pansies (viola). They are available in almost every color combination and even multi-colored.
Cyclamen are very robust garden plants and with long-stemmed flowers in carmine red.
Turkish poppy (Papaver orientale) can grow up to one meter high and shines in a rich red.
Ornamental onion (allium) blooms in spring in large, spherical flowers in purple or white.
Calla (Zantedeschia), originally from Africa, has striking flowers in the shape of a piston and dark green leaves.
Lung herb (Pulmonaria officinalis) directs our gaze towards the ground in spring, it is only about 30 centimeters high and is ideal for a spring flower bed.
Lenzrosen (Helleborus orientalis) are evergreen plants and show a wide range of colors in spring.

THE 20 MOST POPULAR GARDEN FLOWERS FOR SUMMER

How does the garden become a sea of flowers in summer? 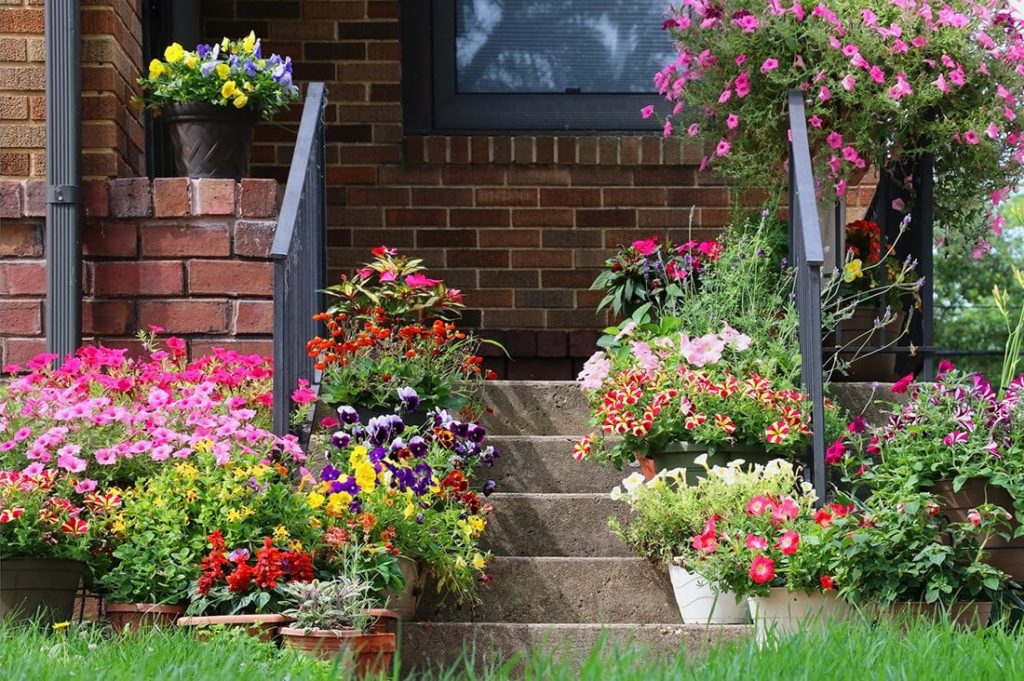 For a beautiful summer garden, you should choose “permanent bloomers” when choosing flowers – with these flowers you can extend and enjoy the summer until October. We have an overview of the 20 most popular summer garden flowers.

Petunias are annual bloomers and vary in different shades of purple.
The red geranium is an absolute summer classic for the garden, it creates beautiful contrasts with the lush green of the garden and attracts bees and butterflies.
Cosmea (Cosmos bipinnatus) in white and rosé grow tall and are a real eye-catcher on your flower bed.
Popular summer perennials for the garden are verbena (verbena), because the numerous small flowers bloom well into late summer and shine in white, violet or bright pink.
Hydrangea “Endless Summer” promises extreme winter hardiness and a flowering period that lasts all summer through to autumn. Varieties in light blue or pale pink appear particularly noble.
Blue cushions (Aubrieta) are a popular summer shrub that is also well suited for the design of a rock garden.
What better place to enjoy a garden than between blooming roses? A classic is the soft pink variety “New Dawn”, which flowers as a climbing plant from June to late autumn and has a pleasantly fruity fragrance.
An atmosphere like in an English cotta garden brings precious roses. They are also called tea hybrids and have large, elegant flowers and intense fragrances.
The exotic Mandevilla (Dipladenia) is also a good choice for the summer garden. The heat-tolerant climbing plant blooms in large flowers and wonderful colors such as pink, red or white.
Marguerites (Leucanthemum) are simply part of summer and should not be missing in your garden. With their large white heads and long stems, they set cheerful accents in the garden and attract all kinds of insects.
Tagetes – also known as the student flower – has a bright orange color and striking patterned flowers. They bloom from June to October and love sunny places in the garden.
Mallows are permanent summer bloomers and grow to a height of almost two meters.
The colorful nasturtium (tropaeolum) is a climbing plant and brings summery flair to the garden with orange flowers.
Verbena (Verbena officinalis) bears lush purple flowers and exudes a spicy fragrance that attracts many butterflies.
With warm flower colors, the yellow, orange and red sun bride (helenium) is ideal for summer. It blooms between July and September.
The diverse varieties of dahlias (dahlia) are also among the most popular summer bloomers in the garden.
Gladiolus (Gladiolus) belong to the iris family and bring tropical accents to the home garden.
The fiery red Montbretien (Crocosmia) are also called shooting stars and bloom until late summer.
Sunflowers (Helianthus annuus) should not be missing in the garden during the most beautiful season. They reach an impressive height of up to three meters.
Scented nettles (agastache hybrids) have delicate purple flowers and bloom from July to October.

THE 20 MOST POPULAR GARDEN FLOWERS FOR AUTUMN

Are you looking for beautiful flowers that will turn the garden into a little paradise even in autumn?
Get inspired by our top 20 favorite garden flowers for the fall season.

Chinese autumn anemone (Anemone hupehensis) with white or light pink flowers
Chrysanthemums (Chrysanthemum) bloom throughout the fall and have a nifty bloom.
Raublattastern (Aster novae-angliae) are popular perennials that adorn the garden with colorful flowers in the autumn months.
In autumn our garden literally hangs full of lanterns – with the orange lantern flowers (Physalis alkekengi)
The chaste tree (Vitex agnus-castus) is a popular autumn flower and grows to a height of two to three meters.
The October saxifrage (saxifraga cortusifolia var. Fortunei), with its small flowers, sets beautiful color accents even in cooler temperatures.
The winter snowball (Viburnum bodnantense) blooms in beautiful pink from November and drives away the gray season.
One of the most famous autumn bloomers is the Herbstzeitlose (Colchicum autumnale) with pale lilac flowers.
Violet heather (Erica) has many small flowers and brings color to dreary autumn days.
Zinnias (Zinnia) belong to the daisy family and bloom in autumn in red, orange, yellow and purple.
Alstroemeria hybrids bloom until September and can even withstand temperatures down to minus 15 degrees.
Common heather (Calluna vulgaris)
Stonecrop (Sedum) forms large area-like vegetation in rich purple and is also suitable as a rock garden planting.
In the late cyclamen (Cyclamen hederifolium) only the delicate flowers appear in late summer and then later the dark green leaves.
Autumn asters bloom from September until well into November.
The peat myrtle (Pernettya mucronata) initially produces beautiful flowers, which then become spherical berries.
Scheinberry (Gaultheria procumbens) is a hardy ground cover and has exceptional berries in red.
Garden pansies (Viola x wittrockiana) bloom from September to November.
The Indian flower tube (canna indica) forms large asymmetrical flowers, which brings color to the garden from June to October.
Montbretien (Crocosmia) are elegant flowers in fiery colors that bloom until October. 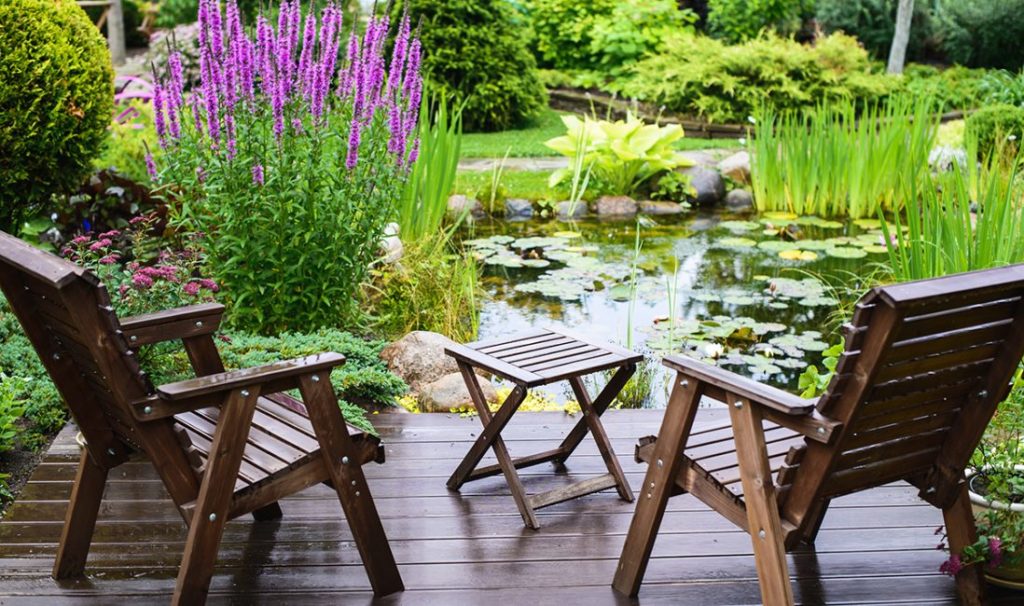 Are you redesigning your garden and are you spoiled for choice when it comes to choosing the right flowers?

Consider the location in the garden when choosing, some flowers feel particularly comfortable in the blazing sun, others prefer a partially shaded spot.
When choosing, pay attention to the season and the flowering time of your garden flowers.
When choosing, you also need to take into account the care required, which varies depending on the type of flower.
You can also specifically support the style of your garden by selecting the right garden flowers.
Combine different types of flowers, which together create a beautiful picture and create attractive contrasts.
For the sowing and planting of the flower bulbs, advance planning and the right timing are very important, because this is how the garden blooms all year round.
Also pay attention to the selection of the flower colors, so that different colors do not bite in the flower bed.

Spring, summer or autumn – we enjoy a variety of garden flowers in every season. With our top 20 most popular garden flowers, you will also find the right choice for your garden. Crocuses, daffodils and tulips are the heralds of spring and drive away the winter blues. In summer we enjoy an abundance of fragrant daffodils, geraniums and roses. The change of season for autumn is announced with sunflowers and autumn anemones.

Garden birds – How to give them a home in your garden

Prepare The Garden For Summer In Winter – 18 Project Ideas

Install source stone in the garden

Any cookies that may not be particularly necessary for the website to function and is used specifically to collect user personal data via analytics, ads, other embedded contents are termed as non-necessary cookies. It is mandatory to procure user consent prior to running these cookies on your website.