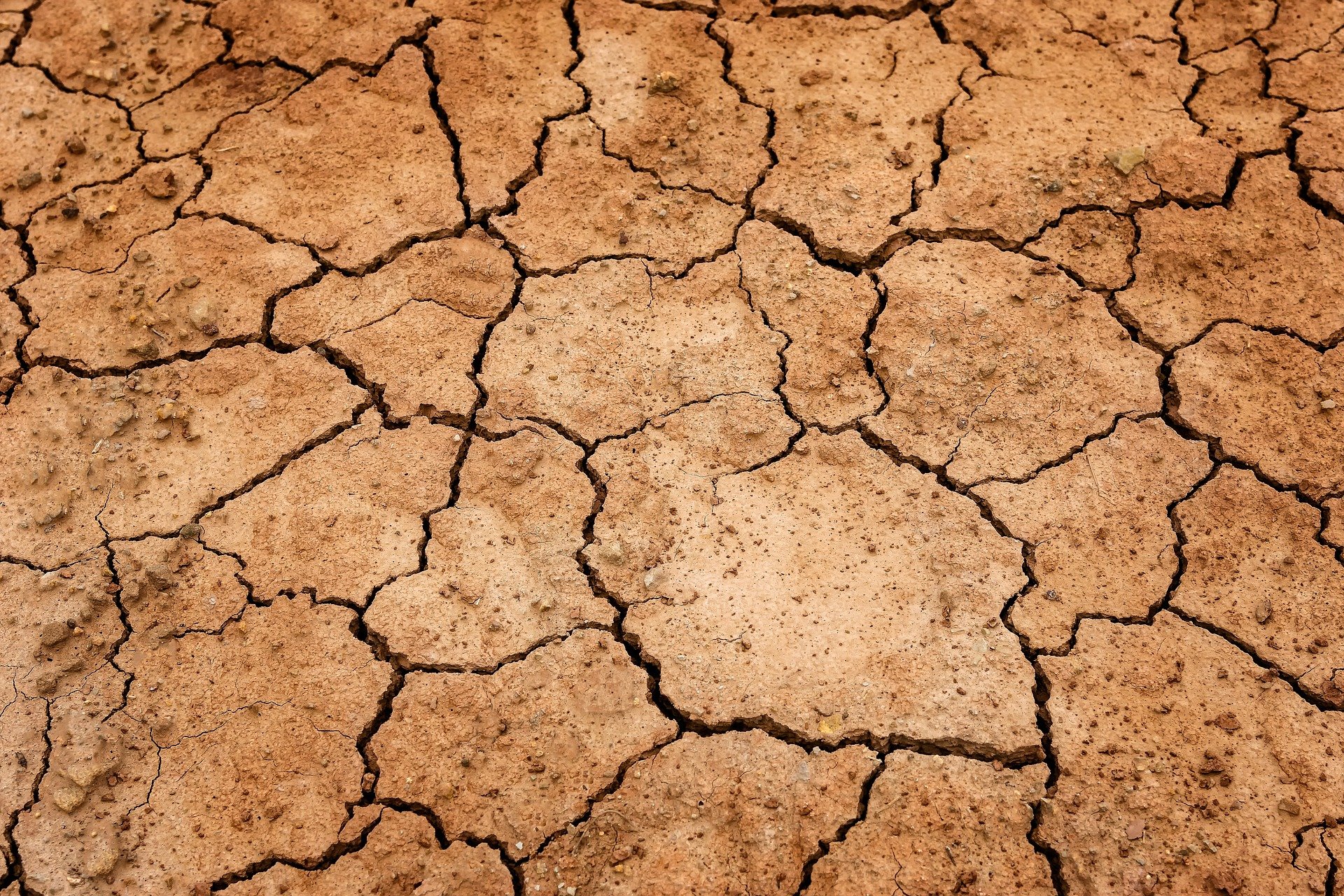 Two thirds of the land area today is about to be sterile in the future. Almost two billion people are then at risk.

Why are deserts dangerous?

Much of the land mass is dry habitat. About two billion people live here. But due to the threat of desertification of the soils, their previous home could become a hostile place, especially where the population is economically dependent on the soil. Desertification will lead to ecological, economic and social upheavals, especially in the developing countries of Africa, where many people continue to live from their agriculture and livestock.
The UN estimates that 250 million people are currently threatened, and for 135 million it could become an acute cause of flight over the next few decades if they no longer see any prospects.

People are losing their livelihood

The consistent exploitation of the soil permanently deprives people of their livelihood. The number of plants is decreasing, the soil absorbs less water, dries up, becomes saline or silted up. At some point the original state can no longer be restored. The soil is completely degraded and therefore almost dead.

A dangerous vicious circle arises. Where people no longer use the land and can no longer support their families, they are forced to look for land or work elsewhere. But the more land is irretrievably destroyed, the less land has to feed more and more people. This can lead to tension and conflict.

How common are deserts?

A third of the land mass on earth are deserts. The hot, dry and dusty deserts such as the Sahara, the Attacama Desert in Chile or the Gobi Desert in China are typical examples. But by definition, completely different regions also belong to it, such as the Antarctic. Because a desert is defined by the annual rainfall of less than 250 millimeters.
Almost half of the land mass on our planet also consists of more or less dry areas. This proportion could increase sharply in the future, because currently around 70 percent of the arid areas are threatened with drying out due to the consequences of human trafficking – an area twice the size of Europe.

How do deserts arise?

There are natural deserts that were created by long-term climatic conditions. Not every desert has always looked like this, because today’s arid regions were often flourishing landscapes thousands of years ago and longer. The Sahara, for example, flourished until a few thousand years ago, but global currents and winds have meant that the average amount of precipitation is low. Only in the monsoon season in summer do the arid regions of Africa literally turn into oases that were and are vital for animals and humans.

Most natural deserts are very stable because they depend on the winds and rainfall cycles. But strong winds can transport the sand across the globe. Likewise, deserts can migrate over winds or enlarge. Currently, the deserts are conquering more and more space and stop at nothing. According to the UN, the Gobi desert has swallowed around 8.5 million hectares of land since the 1950s, regardless of whether it is arable land or forest – that corresponds to a quarter of France.

How is desertification changing the landscape?

Desertification often describes a type of desertification caused by humans. In many places man has cleared forests and created arable land. In Africa there are some examples of how colonial rule changed the landscapes forever. The British, for example, promoted the cultivation of peanuts in the 19th century. To do this, they removed trees and bushes and created large fields instead. But the soil has been so heavily exploited over the past few decades that it has become sterile in many places. In studies from Africa, contemporary witnesses spoke of the once green landscapes that surrounded the places. Then everything was cut down so that the deserts could spread through the little or no vegetation.

The Aral Sea in Central Asia is an example of how economic growth can completely destroy ecology. The inhabitants used too much water and dried up the lake almost completely in just a few decades. Today it is largely over-salted. The actual goal of building the region economically has robbed itself of its foundation. The same goes for Lake Chad or Lake Faguibine in Mali. Today it is particularly large agricultural landscapes, such as in Saudi Arabia, that are powered by groundwater that is thousands of years old. However, the consumption is far higher than is replenished via the rain.

Geologists have been warning of the continued exploitation of the soil for decades. But the sheer misery of the people and the constant pressure to do better business have consistently drowned out this criticism.

What role does climate change play?

Much depends on how global currents develop, which are currently transporting warm or cold air and rain masses across the planet. The desert areas can expand due to climatic changes, elsewhere deserts can even turn green due to more precipitation. For most regions, however, researchers make different statements, even if more and more rain should fall.
For the Sahel zone in particular, more heavy rain events are expected. That means a lot of rain. However, the already eroded soil cannot absorb the amount. There is then a lack of basic moisture, roots and living beings that loosen the soil. If this happens, experts assume that the amount of rainwater that is often eagerly awaited and pelts the ground will likely simply flow over the surface, lead to flooding and continue to destroy the ground.

In addition to extreme weather events such as heavy rain, periods of drought are also increasing. So far, they have occurred roughly every 30 years in Africa. The dry phases in the deserts, which are interrupted by the monsoon rains, could last longer in the future.

If the global average temperature, as previously assumed, should rise between one and two degrees Celsius and precipitation should fall at the same time, this could reduce the seeping water by 40 to 70 percent, as researchers have found for the European regions, for example. Such serious changes can have a lasting effect on landscapes that are already dry.

Is Europe also threatened by deserts?

Desertification does not only affect regions in Africa, America or Central Asia. In Europe, too, dry landscapes are threatened with irrevocably turning into deserts over the next few decades. In Spain, for example, a fifth of the total area is threatened by desertification.

Some of the reasons go back several centuries, when the Spanish crown completely cleared huge stretches of land for its mighty fleet in order to get building material for the ships. However, excessive water consumption also plays a role today and the soil rarely or never has a chance to regenerate. Here too, agriculture threatens to permanently lose large areas.

What solutions are there?

In Africa, different states began to completely plant the continent from west to east in the 1980s in order to prevent the desert from spreading. But the endeavor was largely unsuccessful. Most of the trees, possibly around 80 percent or more, have dried up and have since died. The big project of the green belt has therefore failed for the time being.

Nevertheless, there are success stories, albeit on a much smaller scale. In some regions of Africa, people have not only planted new trees, but have also tried to hold back the little rainwater. Due to natural barriers, more water has seeped into the ground than evaporated. Over the years the vegetation has recovered. Technical innovations could also help improve local water management in the future – this would be particularly necessary in developing countries.

Soils must be able to recover

Such attempts, as scientists have experienced several times in some projects on site, are only successful if the management is less intensive. Then soils can recover over the years, enrich nutrients and store more water. This could also be implemented on a large scale, but the local financial resources are too low and even the billions in aid from industrialized countries are not even rudimentarily enough to fundamentally change the situation – the unstable political conditions make it even more difficult.

Another problem: In order for the soil to recover, farmers and herdsmen sometimes have to avoid the areas for years. But especially in developing countries, people cannot think of something as abstract as soil fertility in five years when they have to feed their children today and are fighting for survival themselves.

The growing population is a problem

As the soils continue to degrade, the population is growing. Between 1960 and 2010 it more than tripled in Africa to more than a billion people and more than doubled in Central Asia. Experts hope that low child mortality, better health care and educational opportunities will help slow growth rates in the future. Almost ten billion people could still be living on the planet by 2050.

A permanent supply only appears to be possible if the land is managed sustainably and efficiently from now on. This also includes proportionate consumption. The future therefore calls for unpopular measures that seem just as drastic as the exploitation of the past decades.

HOW CAN I MAKE MY BALCONY BEAUTIFUL?

How To Properly Store Firewood In The Garden

Turning An Old Backyard Garage Into A Guest Cottage

You can do that for the soil

This website uses cookies to improve your experience while you navigate through the website. Out of these cookies, the cookies that are categorized as necessary are stored on your browser as they are essential for the working of basic functionalities of the website. We also use third-party cookies that help us analyze and understand how you use this website. These cookies will be stored in your browser only with your consent. You also have the option to opt-out of these cookies. But opting out of some of these cookies may have an effect on your browsing experience.
Necessary Always Enabled
Necessary cookies are absolutely essential for the website to function properly. This category only includes cookies that ensures basic functionalities and security features of the website. These cookies do not store any personal information.
Non-necessary
Any cookies that may not be particularly necessary for the website to function and is used specifically to collect user personal data via analytics, ads, other embedded contents are termed as non-necessary cookies. It is mandatory to procure user consent prior to running these cookies on your website.
SAVE & ACCEPT